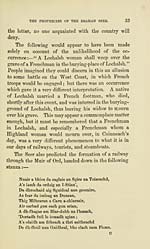 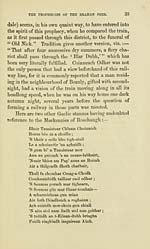 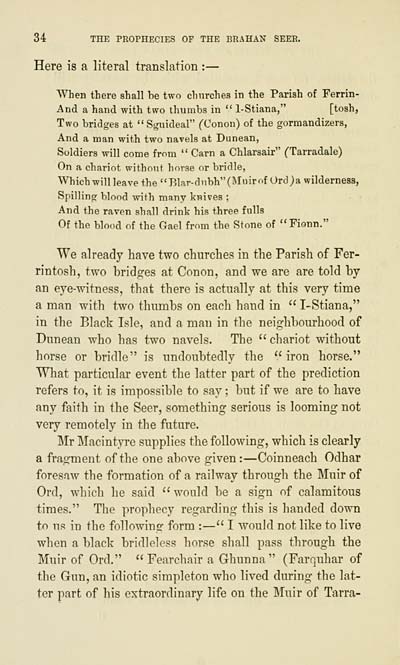 34 THE PROPHECIES OP THE BRAHAN SEER.
Here is a literal translation : —
When there shall be two clinrclies in the Parish of Ferrin-
And a hand with two thumbs in " 1-Stiana," [tosh,
Two bridges at " Sguideal" (Conon) of the gormandizers,
And a man with two navels at Dunean,
Soldiers will come from " Carn a Chlarsair" (Tarradale)
On a chariot without horse or bridle,
Which -willleave the "Blar-dnbh"(IM"ir'^f Ordja wilderness,
Spilling blood with many kwives ;
And the raven shall drink his three fnlls
Of the blood of the Gael from the Stone of "Fionn."
We already have two churches in the Parish of Fer-
rintosh, two bridges at Conon, and we are are told by
an eye-witness, that there is actually at this very time
a man with two thumbs on each hand in " I-Stiana,"
in the Black Isle, and a man in the neighbourhood of
Dunean who has two navels. The " chariot without
horse or bridle" is undoubtedly the "iron horse."
What particular event the latter part of the prediction
refers to, it is impossible to say : but if we are to have
any faith in the Seer, something serious is looming not
very remotely in the future.
Mr Macintyre supplies the following, which is clearly
a fragment of the one above given: — Coinneach Odhar
foresaw the formation of a railway through the Muir of
Ord, which he said " would be a sign of calamitous
times." The prophecy regarding this is handed down
to us in the following form : — " I would not like to live
when a black bridleless horse shall pass through the
Muir of Ord." " Fearchair a Ghunna" (Farquhar of
the Gun, an idiotic simpleton who lived during the lat-
ter part of his extraordinary life on the Muir of Tarra-