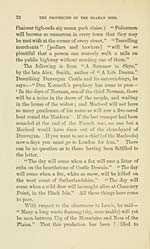 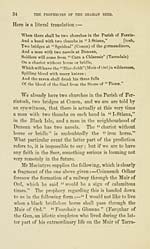 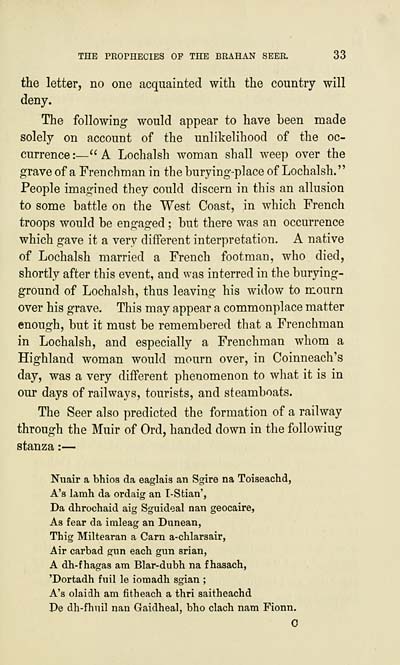 THE PROPHECIES OF THE BRAHAN SEER. 33
the letter, no one acquainted with the country will
The following would appear to have been made
on account of the unlikelihood of the oc-
currence : — " A Lochalsh woman shall weep over the
grave of a Frenchman in the burying-place of Lochalsh."
People imagined they could discern in this an allusion
to some battle on the West Coast, in which French
troops would be engaged ; but there was an occurrence
which gave it a very different interpretation. A native
of Lochalsh married a French footman, who died,
shortly after this event, and was interred in the burying-
ground of Lochalsh, thus leaving his widow to mourn
over his grave. This may appear a commonplace matter
enough, but it must be remembered that a Frenchman
in Lochalsh, and especially a Frenchman whom a
Highland woman would mourn over, in Coinneach's
day, was a very different phenomenon to what it is in
our days of railways, tourists, and steamboats.
The Seer also predicted the formation of a railway
through the Muir of Ord, handed down in the following
stanza : —
Nuair a bhioa da eaglais an Sgire na Toiseachd,
A's lamh da ordaig an T-Stian',
Da dhrochaid aig Sguideal nan geocaire,
As fear da imleag an Dunean,
Thig Miltearan a Carn a-chlarsair,
Air carbad gun each gun srian,
A dh-fhagas am Blar-dubh na f hasach,
'Dortadh fuil le iomadh sgian ;
A's olaidh am fitheach a thri saitheachd
De dh-fhnil nan Gaidheal, bho clach nam Fionn.