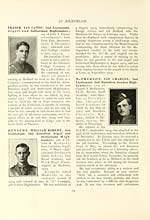 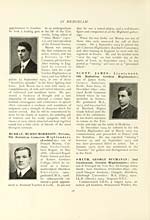 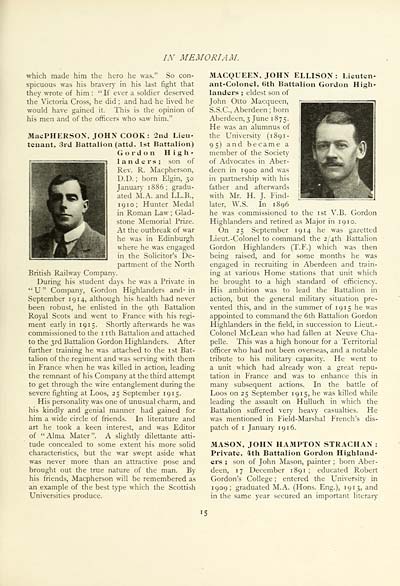 IN MEM OKI AM.
which made him the hero he was." So con-
spicuous was his braver)- in his last fight that
they wrote of him : " If ever a soldier deserved
the Victoria Cross, he did ; and had he lived he
would have gained it. This is the opinion of
his men and of the officers who saw him."
MacPHERSON, JOHN COOK: 2nd Lieu-
tenant, 3rd Battalion (attd. 1st Battalion)
Gordon High-
landers; son of
Rev. R. Macpherson,
D.D. ; born Elgin, 30
January 1886; gradu-
ated M.A. and LL.B.,
1 9 10; Hunter Medal
in Roman Law ; Glad-
stone Memorial Prize.
At the outbreak of war
he was in Edinburgh
where he was engaged
in the Solicitor's De-
partment of the North
British Railway Company.
During his student days he was a Private in
" U " Company, Gordon Highlanders and- in
September 19 14, although his health had never
been robust, he enlisted in the 9th Battalion
Royal Scots and went to France with his regi-
ment early in 19 15. Shortly afterwards he was
commissioned to the nth Battalion and attached
to the 3rd Battalion Gordon Highlanders. After
further training he was attached to the 1st Bat-
talion of the regiment and was serving with them
in France when he was killed in action, leading
the remnant of his Company at the third attempt
to get through the wire entanglement during the
severe fighting at Loos, 25 September 191 5.
His personality was one of unusual charm, and
his kindly and genial manner had gained for
him a wide circle of friends. In literature and
art he took a keen interest, and was Editor
of "Alma Mater". A slightly dilettante atti-
tude concealed to some extent his more solid
characteristics, but the war swept aside what
was never more than an attractive pose and
brought out the true nature of the man. By
his friends, Macpherson will be remembered as
an example of the best type which the Scottish
Universities produce.
MACQUEEN, JOHN ELLISON : Lieuten-
ant-Colonel, 6th Battalion Gordon High-
landers ; eldest son of
John Otto Macqueen,
S.S.C., Aberdeen ; born
Aberdeen, 3 June 1875.
He was an alumnus of
the University (1891-
95) and became a
member of the Society
of Advocates in Aber-
deen in 1900 and was
in partnership with his
father and afterwards
with Mr. H. J. Find-
later, W.S. In 1896
he was commissioned to the 1st V.B. Gordon
Highlanders and retired as Major in 1910.
On 25 September 19 14 he was gazetted
Lieut.-Colonel to command the 2/4th Battalion
Gordon Highlanders (T.F.) which was then
being raised, and for some months he was
engaged in recruiting in Aberdeen and train-
ing at various Home stations that unit which
he brought to a high standard of efficiency.
His ambition was to lead the Battalion in
action, but the general military situation pre-
vented this, and in the summer of 19 15 he was
appointed to command the 6th Battalion Gordon
Highlanders in the field, in succession to Lieut.-
Colonel McLean who had fallen at Neuve Cha-
pelle. This was a high honour for a Territorial
officer who had not been overseas, and a notable
tribute to his military capacity. He went to
a unit which had already won a great repu-
tation in France and was to enhance this in
many subsequent actions. In the battle of
Loos on 25 September 19 15, he was killed while
leading the assault on Hulluch in which the
Battalion suffered very heavy casualties. He
was mentioned in Field-Marshal French's dis-
patch of 1 January 19 16.
MASON, JOHN HAMPTON STRACHAN :
Private, 4th Battalion Gordon Highland-
ers ; son of John Mason, painter ; born Aber-
deen, 17 December 1891 ; educated Robert
Gordon's College ; entered the University in
1909; graduated M.A. (Hons. Eng.), 1913, and
in the same year secured an important literary
r 5