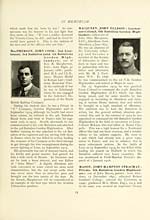 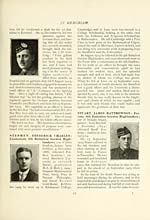 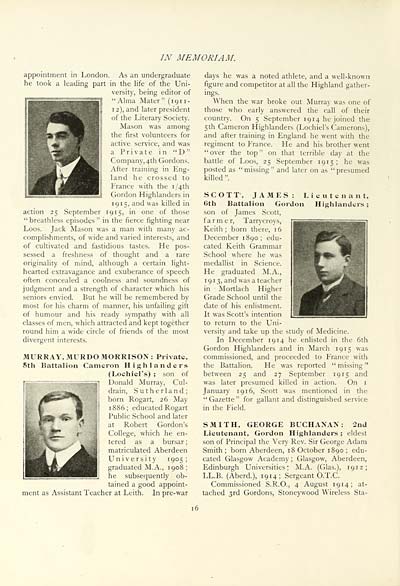 IN MEMORIAM.
appointment in London. As an undergraduate
he took a leading part in the life of the Uni-
versity, being editor of
"Alma Mater" (191 1-
12), and later president
of the Literary Society.
Mason was among
the first volunteers for
active service, and was
a Private in "D"
Company, 4th Gordons.
After training in Eng-
land he crossed to
France with the i/ath
Gordon Highlanders in
1 9 1 5, and was killed in
action 25 September 1915, in one of those
"breathless episodes" in the fierce fighting near
Loos. Jack Mason was a man with many ac-
complishments, of wide and varied interests, and
of cultivated and fastidious tastes. He pos-
sessed a freshness of thought and a rare
originality of mind, although a certain light-
hearted extravagance and exuberance of speech
often concealed a coolness and soundness of
judgment and a strength of character which his
seniors envied. But he will be remembered by
most for his charm of manner, his unfailing gift
of humour and his ready sympathy with all
classes of men, which attracted and kept together
round him a wide circle of friends of the most
divergent interests.
MURRAY, MURDO MORRISON : Private,
5th Battalion Cameron Highlanders
(Lochiel's) ; son of
Donald Murray, Cul-
drain, Sutherland;
born Rogart, 26 May
1886 ; educated Rogart
Public School and later
at Robert Gordon's
College, which he en-
tered as a bursar ;
matriculated Aberdeen
University 1905 ;
graduated M. A., 1908;
he subsequently ob-
tained a good appoint-
ment as Assistant Teacher at Leith. In pre-war
days he was a noted athlete, and a well-known
figure and competitor at all the Highland gather-
ings.^
When the war broke out Murray was one of
those who early answered the call of their
country. On 5 September 19 14 he joined the
5th Cameron Highlanders (Lochiel's Camerons),
and after training in England he went with the
regiment to France. He and his brother went
"over the top" on that terrible day at the
battle of Loos, 25 September 1915 ; he was
posted as "missing" and later on as "presumed
killed ".
SCOTT, JAMES: Lieutenant.
6th Battalion Gordon Highlanders ;
son of James Scott,
farmer, Tarry croys,
Keith ; born there, 16
December 1890 ; edu-
cated Keith Grammar
School where he was
medallist in Science.
He graduated M.A.,
1 9 1 3, and was a teacher
in Mortlach Higher
Grade School until the
date of his enlistment.
It was Scott's intention
to return to the Uni-
versity and take up the study of Medicine.
In December 1914 he enlisted in the 6th
Gordon Highlanders and in March 1915 was
commissioned, and proceeded to France with
the Battalion. He was reported " missing "
between 25 and 27 September 1915 and
was later presumed killed in action. On 1
January 19 16, Scott was mentioned in the
" Gazette " for gallant and distinguished service
in the Field.
SMITH, GEORGE BUCHANAN: 2nd
Lieutenant, Gordon Highlanders ; eldest
son of Principal the Very Rev. Sir George Adam
Smith ; born Aberdeen, 18 October 1890 ; edu-
cated Glasgow Academy ; Glasgow, Aberdeen,
Edinburgh Universities; M.A. (Glas.), 191 2;
LL.B. (Aberd.), 1914; Sergeant O.T.C.
Commissioned S.R.O, 4 August 1914; at-
tached 3rd Gordons, Stoneywood Wireless Sta-
16