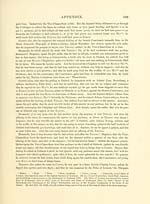 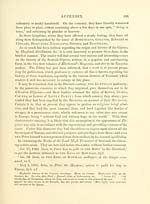 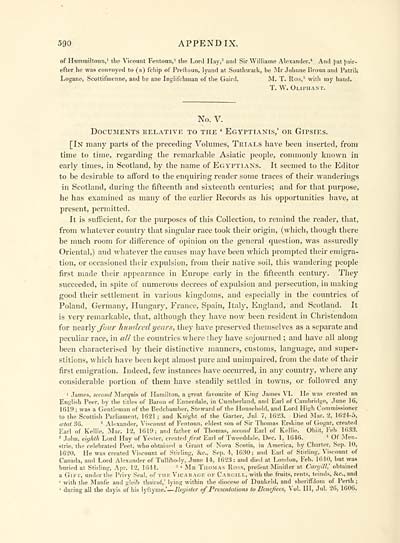 590 APPENDIX.
of Hammiltoun,' the Vicount Fentoun,* tlie Lord Hay,^ and Sir Williame Alexander.' And fat fair-
efter he was convoyed to (a) fchip of Prelloun, lyand at Southwark, be INIr Johnne Broun and Patrik
Logane, Scottifmenne, and be ane Ingiifchman of the Gaiid. M. T. Ros,* with my hand.
T. W. Oliphant.
No. V.
Documents uelative to the ' Egyptianis/ or Gipsies.
[In many parts of the preceding Volumes, Trials have been inserted, from
time to time, regarding the remarkable Asiatic people, commonly known in
early times, in Scotland, by the name of Egyptians. It seemed to the Editor
to be desirable to afford to the enquiring reader some traces of their wanderings
in Scotland, during the fifteenth and sixteenth centuries; and for that purpose,
he has examined as many of the earlier Records as his opportunities have, at
present, permitted.
It is sufficient, for the purposes of this Collection, to remind the reader, that,
from whatever country that singular race took their origin, (which, though there
be much room for difference of opinion on the general question, was assuredly
Oriental,) and M'hatever the causes may have been which promjited their emigra-
tion, or occasioned their expulsion, from their native soil, this wandering people
first made their ajipearance in Europe early in the fifteenth century. They
succeeded, in spite of numerous decrees of expulsion and persecution, in making
good their settlement in various kingdoms, and especially in the countries, of
Poland, Germany, Hungary, France, Spain, Italy, England, and Scotland. It
is very remarkable, that, although they have now been resident in Christendom
for nearly Jour hundred ijears, they have preserved themselves as a separate and
peculiar race, in all the countries where ihey have sojourned ; and have all along
been characterised by their distinctive manners, customs, language, and super-
stitions, which have been kept almost pure and unimpaired, from the date of their
first emigration. Indeed, few instances have occurred, in any country, where any
considerable portion of them have steadily settled in towns, or followed any
1 James, second Marquis of Hamilton, a great favourite of King James VL He was created an
English Peer, by the titles of Baron of Ennerdale, in Cumberland, and Earl of Cambridge, June 16,
1619 ; was a Gentleman of the Bedchamber, Steward of the Household, and Lord High Commissioner
to the Scottish Parliament, 1621 ; and Knight of the Garter, Jul- 7, 16:^3. Died Mar. 2, 1624-3,
cBtal 36. ^ Alexander, Viscount of Feiitoun, eldest son of Sir Thomas Erskine of Gogar, created
Earl of Kellie, Mar. 12, 1619; and father of Thomas, second Earl of Kellie. Obiit, Feb 1633.
' John, eighth Lord Hay of Yester, created Jirst Earl of Tweeddale, Dec. 1, 1646. * Of Men-
strie, the celebrated Peet, who obtained a Grant of Nova Scotia, in America, by Charter, Sep. 10,
1620. He was created Viscount of Stirling, &c., Sep. 4, 1630; and Earl of Stirling, Viscount of
Canada, and Lord Alexander of Tullibody, June 14, 1623: and died at London, Feb. 1640, but was
buried at Stirling, Apr. 12, 1641. = ' Mr Thomas Ross, prefent Miniller at Carglll,' obtained
a Gift, under the Privy Seal, of the Vicarage of Cargill, with the fruits, rents, teinds, &c., and
' with tlie Manfe and gleib thairof,' lying within the diocese of Dunkeld, and sheriffdom of Perth ;
' during all the dayis of his \)-{lyme.'~Register of Presentations to Benefices, Vol. Ill, Jul. 26, 1606.