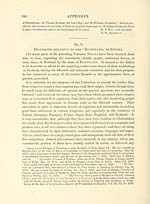 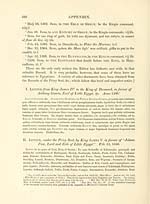 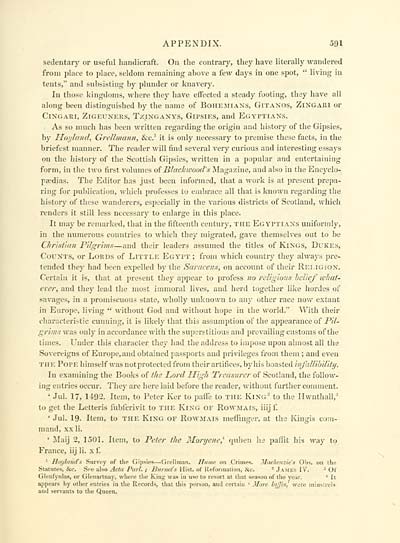 APPENDIX. 591
sedentary or useful handicraft. On tlie contrary, they have literally wandered
from place to place, seldom remaining above a few days in one spot, " living in
tents," and subsisting by plunder or knavery.
In those kingdoms, where they have effected a steady footing, they have all
along been distinguished by the name of Bohemians, Gitanos, Zingari or
ClXGARI, ZiGEUXERS, TziNGANYS, GiPSIES, and EGYPTIANS.
As so much has been written regarding the origin and history of the Gipsies,
by IToi;h(ii(l, GreUmanu, &c.' it is only necessary to premise these facts, in the
briefest manner. The reader will find several very curious and interesting essays
on the history of the Scottish Gipsies, written in a popular and entertaining
form, in the two first volumes oil3Iack woods Magazine, and also in the Encyclo-
paedias. The Editor has just been informed, that a work is at present prepa-
ring for publication, which professes to embrace all that is known regarding the
history of these wanderers, especially in the various districts of Scotland, which
renders it still less necessary to enlarge in this place.
It may be remarked, that in the fifteentli century, the Egyptians uniformly,
in the numerous countries to M'hich they migrated, gave themselves out to be
Christian Pilgrims — and their leaders assumed the titles of Kings, Dukes,
Counts, or Lords of Little Egypt ; from which country they always pre-
tended they had been expelled by the Saracens, on account of their Riu.iGioN.
Certain it is, that at present they aj)pear to profess no religious hclief what-
ever, and they lead the most immoral lives, and herd together like hordes of
savages, in a promiscuous state, wholly vinknown to any other race now extant
in Europe, living " without God and without hope in the world." ^^^ith their
characteristic cunning, it is likely that this assumption of the appearance of Pil-
grims was only in accordance with the superstitious and prevailing customs of the
times. Under this character they had the address to impose upon almost all the
Sovereigns of Europe, and obtained passports and privileges fi-om them ; and even
the Pope himself was notprotected from their artifices, by his boasted infallihilitij.
In examining the Books of the Lord High Treasurer of Scotland, the follow-
ing entries occur. They are here laid before the reader, without further comment.
' Jul. 17, 14-92. Item, to Peter Ker to palfe to the King- to the Hwnthall,^
to get the Letteris fublcrivit to the King of Rowmais, iiij f.
' Jul. 19. Item, to THE King of Rowjiais meffinger, at the Kingis com-
mand, XX li.
' Maij 2, 1501. Item, to Peter the Morijene,^ cpihen he paffit his way to
France, iij li. x f.
' Hnyland's Survey of the Gipsies — Grellman. Hume on Crimes. Mackenzie's Olis. 011 the
Statutes, &c. See also Acta Pari. ; liiirnet's Hist, of Reformation, &c. ' James IV. ^ Of
Glenfynlas, or Glenartnay, where tlie King was in use to resort at that season of the year. < It
appears by other entries in the Records, that this person, and certain ' More Iqjjhs,' were niiustrels
and servants to the Queen.