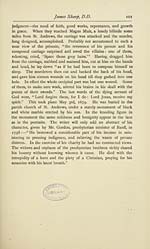 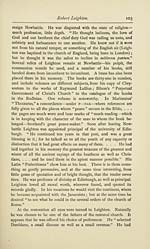 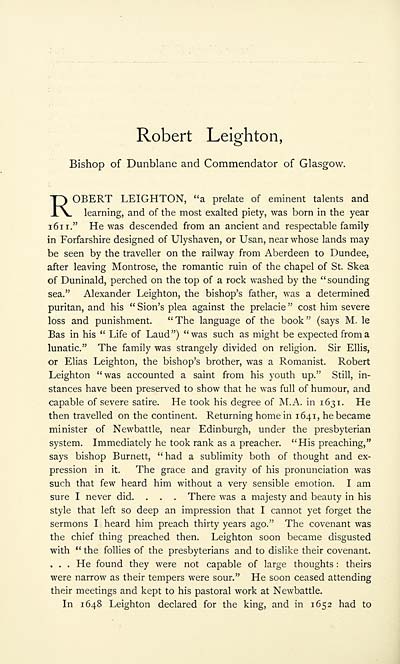 Robert Leighton,
Bishop of Dunblane and Commendator of Glasgow.
ROBERT LEIGHTON, "a prelate of eminent talents and
learning, and of the most exalted piety, was born in the year
1611." He was descended from an ancient and respectable family
in Forfarshire designed of Ulyshaven, or Usan, near whose lands may
be seen by the traveller on the railway from Aberdeen to Dundee,
after leaving Montrose, the romantic ruin of the chapel of St. Skea
of Duninald, perched on the top of a rock washed by the "sounding
sea." Alexander Leighton, the bishop's father, was a determined
puritan, and his " Sion's plea against the prelacie " cost him severe
loss and punishment. "The language of the book" (says M. le
Bas in his " Life of Laud") "was such as might be expected from a
lunatic." The family was strangely divided on religion. Sir Ellis,
or Elias Leighton, the bishop's brother, was a Romanist. Robert
Leighton "was accounted a saint from his youth up." Still, in-
stances have been preserved to show that he was full of humour, and
capable of severe satire. He took his degree of M.A. in 1631. He
then travelled on the continent. Returning home in 1641, he became
minister of Newbattle, near Edinburgh, under the presbyterian
system. Immediately he took rank as a preacher. "His preaching,"
says bishop Burnett, "had a sublimity both of thought and ex-
pression in it. The grace and gravity of his pronunciation was
such that few heard him without a very sensible emotion. I am
sure I never did. . . . There was a majesty and beauty in his
style that left so deep an impression that I cannot yet forget the
sermons I heard him preach thirty years ago." The covenant was
the chief thing preached then. Leighton soon became disgusted
with " the follies of the presbyterians and to dislike their covenant.
. . . He found they were not capable of large thoughts : theirs
were narrow as their tempers were sour." He soon ceased attending
their meetings and kept to his pastoral work at Newbattle.
In 1648 Leighton declared for the king, and in 1652 had to