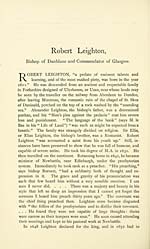 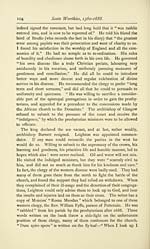 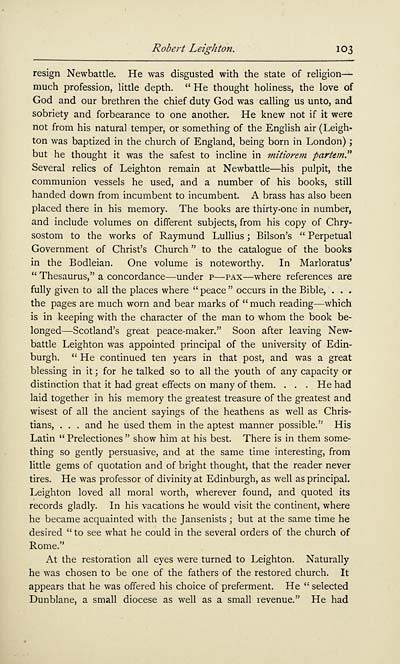 Robert Leighton. 103
resign Newbattle. He was disgusted with the state of religion —
much profession, little depth. " He thought holiness, the love of
God and our brethren the chief duty God was calling us unto, and
sobriety and forbearance to one another. He knew not if it were
not from his natural temper, or something of the English air (Leigh-
ton was baptized in the church of England, being born in London) ;
but he thought it was the safest to incline in mitiorem partem."
Several relics of Leighton remain at Newbattle — his pulpit, the
communion vessels he used, and a number of his books, still
handed down from incumbent to incumbent. A brass has also been
placed there in his memory. The books are thirty-one in number,
and include volumes on different subjects, from his copy of Chry-
sostom to the works of Raymund Lullius ; Bilson's " Perpetual
Government of Christ's Church " to the catalogue of the books
in the Bodleian. One volume is noteworthy. In Marloratus'
" Thesaurus," a concordance — under p — pax — where references are
fully given to all the places where " peace " occurs in the Bible, . . .
the pages are much worn and bear marks of " much reading — which
is in keeping with the character of the man to whom the book be-
longed—Scotland's great peace-maker." Soon after leaving New-
battle Leighton was appointed principal of the university of Edin-
burgh. " He continued ten years in that post, and was a great
blessing in it ; for he talked so to all the youth of any capacity or
distinction that it had great effects on many of them. . . . He had
laid together in his memory the greatest treasure of the greatest and
wisest of all the ancient sayings of the heathens as well as Chris-
tians, . . . and he used them in the aptest manner possible." His
Latin " Prelectiones " show him at his best. There is in them some-
thing so gently persuasive, and at the same time interesting, from
little gems of quotation and of bright thought, that the reader never
tires. He was professor of divinity at Edinburgh, as well as principal.
Leighton loved all moral worth, wherever found, and quoted its
records gladly. In his vacations he would visit the continent, where
he became acquainted with the Jansenists ; but at the same time he
desired " to see what he could in the several orders of the church of
Rome."
At the restoration all eyes were turned to Leighton. Naturally
he was chosen to be one of the fathers of the restored church. It
appears that he was offered his choice of preferment. He " selected
Dunblane, a small diocese as well as a small revenue." He had