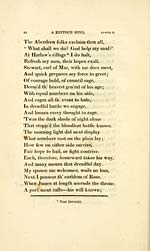 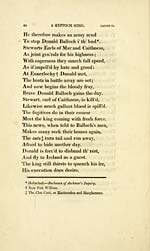 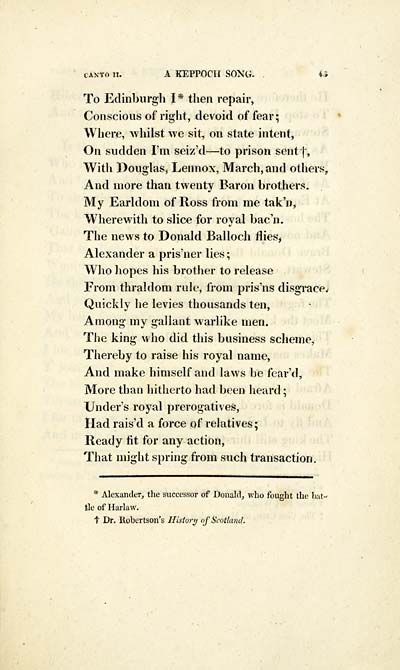 canto n. A KEPPOCII SONG. . 4J
To Edinburgh I* then repair,
Conscious of right, devoid of fear ;
Where, whilst we sit, on state intent,
On sudden I'm seiz'd — to prison sentf,
With Douglas, Lennox, March, and others,
And more than twenty Baron brothers.
My Earldom of Ross from me tak'n,
Wherewith to slice for royal bac'n.
The news to Donald Balloch flies,
Alexander a pris'ner lies ;
Who hopes his brother to release
From thraldom rule, from pris'ns disgrace,
Quickly he levies thousands ten,
Among my gallant warlike men.
The king who did this business scheme,
Thereby to raise his royal name,
And make himself and laws be fear'd,
More than hitherto had been heard ;
Under's royal prerogatives,
Had rais'd a force of relatives;
Ready fit for any action,
That might spring from such transaction.
* Alexander, the successor of Donald, who fought the bat-
tle of Harlaw.
t Dr. Robertson's History of Scotland.