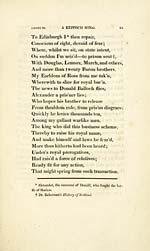 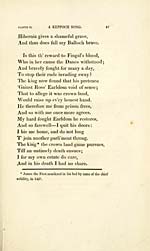 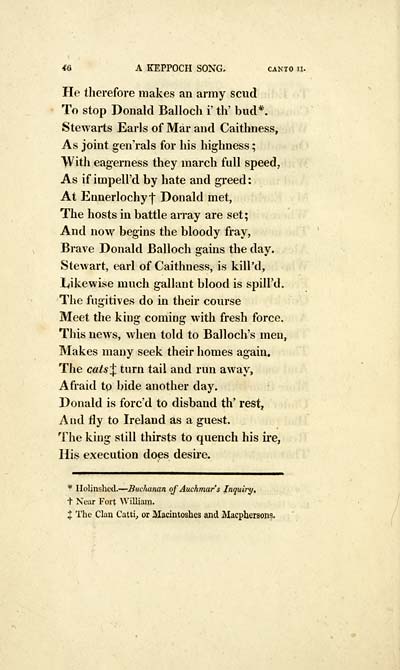 <G A KEPPOCH SONG. canto u>
He therefore makes an army scud
To stop Donald Balloch i' th' bud*.
Stewarts Earls of Mar and Caithness,
As joint gen'rals for his highness ;
With eagerness they inarch full speed,
As if impell'd by hate and greed:
At Ennerlochyf Donald met,
The hosts in battle array are set;
And now begins the bloody fray,
Brave Donald Balloch gains the day.
Stewart, earl of Caithness, is kill'd,
likewise much gallant blood is spill'd.
The fugitives do in their course
Meet the king coming with fresh force.
This news, when told to Balloch's men,
Makes many seek their homes again.
The cats$ turn tail and run away,
Afraid to bide another day.
Donald is forc'd to disband th' rest,
And fly to Ireland as a guest.
The king still thirsts to quench his ire,
His execution does desire.
* Holinshed. — Buchanan of Auchmar's Inquiry,
t Near Fort William.
% The Clan Catti, or Macintoshes and Macphersons.