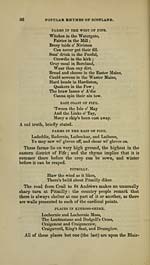 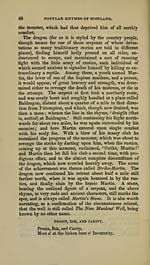 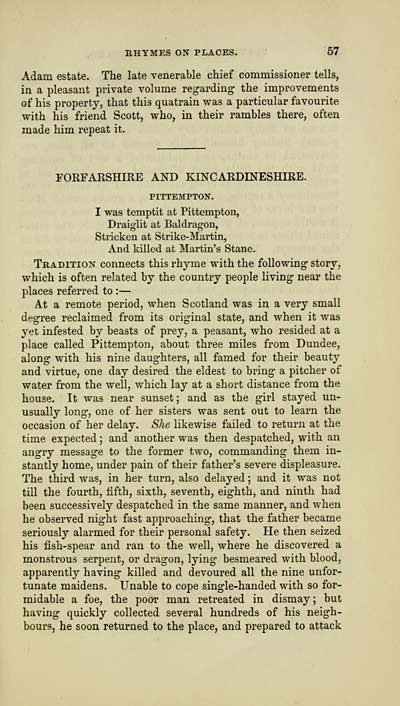 RHYMES ON PLACES. 67
Adam estate. The late venerable chief commissioner tells,
in a pleasant private volume reg-arding the improvements
of his property, that this quatrain was a particular favourite
with his friend Scott, who, in their rambles there, often
made him repeat it.
FORFARSHIRE AND KINCARDmESHIRE.
PITTEMPTON.
I was temptit at Pittempton,
Draiglit at Baldragon,
Stricken at Strike-Martin,
And killed at Martin's Stane,
Tradition connects this rhyme with the following story,
which is often related by the country people living near the
places referred to : —
At a remote period, when Scotland was in a very small
degree reclaimed from its original state, and when it was
yet infested by beasts of prey, a peasant, who resided at a
place called Pittempton, about three miles from Dundee,
along with his nine daughters, all famed for their beauty
and virtue, one day desired the eldest to bring a pitcher of
water from the well, which lay at a short distance from the
house. It was near sunset ; and as the girl stayed un-
usually long, one of her sisters was sent out to learn the
occasion of her delay. She likewise failed to return at the
time expected ; and another was then despatched, with an
angry message to the former two, commanding them in-
stantly home, under pain of their father's severe displeasure.
The third was, in her turn, also delayed ; and it was not
till the fourth, hfth, sixth, seventh, eighth, and ninth had
been successively despatched in the same manner, and when
he observed night fast approaching, that the father became
seriously alarmed for their personal safety. He then seized
his fish-spear and ran to the well, where he discovered a
monstrous serpent, or dragon, lying besmeared with blood,
apparently having killed and devoured all the nine unfor-
tunate maidens. Unable to cope single-handed with so for-
midable a foe, the poor man retreated in dismay; but
having quickly collected several hundreds of his neigh-
bours, he soon returned to the place, and prepared to attack