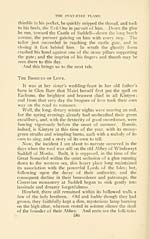 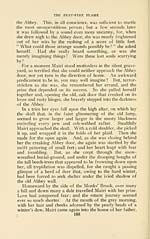 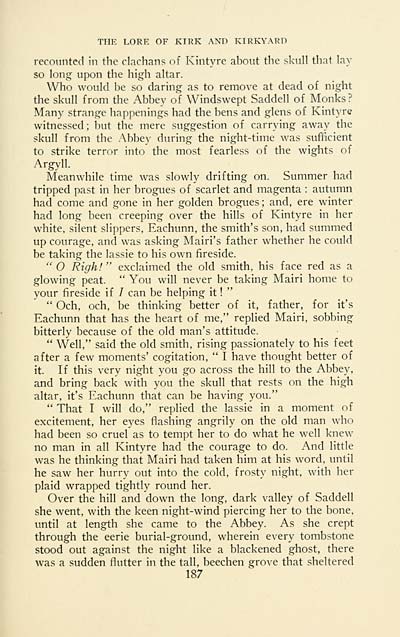 THE LORE OF KIRK AND KIRKYARP
recounted in the clachans of Kintyre about the skull that lay
so long upon the high altar.
Who would be so daring as to remove at dead of night
the skull from the Abbey of Windswept Saddell of Monks?
Many strange happenings had the bens and glens of Kintyre
witnessed ; but the mere suggestion of carrying away the
skull from the Abbey during the night-time was sufficient
to strike terror into the most fearless of the wights of
Argyll.
Meanwhile time was slowly drifting on. Summer had
tripped past in her brogues of scarlet and magenta : autumn
had come and gone in her golden brogues ; and, ere winter
had long been creeping over the hills of Kintyre in her
white, silent slippers, Eachunn, the smith's son, had summed
up courage, and was asking Mairi's father whether he could
be taking the lassie to his own fireside.
" O Righ!" exclaimed the old smith, his face red as a
glowing peat. " You will never be taking Mairi home to
your fireside if / can be helping it ! "
" Och, och, be thinking better of it, father, for it's
Eachunn that has the heart of me," replied Mairi, sobbing
bitterly because of the old man's attitude.
" Well," said the old smith, rising passionately to his feet
after a few moments' cogitation, " I have thought better of
it. If this very night you go across the hill to the Abbey,
and bring back with you the skull that rests on the high
altar, it's Eachunn that can be having you."
" That I will do," replied the lassie in a moment of
excitement, her eyes flashing angrily on the old man who
had been so cruel as to tempt her to do what he well knew
no man in all Kintyre had the courage to do. And little
was he thinking that Mairi had taken him at his word, until
he saw her hurry out into the cold, frosty night, with her
plaid wrapped tightly round her.
Over the hill and down the long, dark valley of Saddell
she went, with the keen night-wind piercing her to the bone,
until at length she came to the Abbey. As she crept
through the eerie burial-ground, wherein every tombstone
stood out against the night like a blackened ghost, there
was a sudden flutter in the tall, beechen grove that sheltered
187