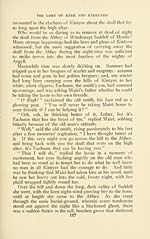 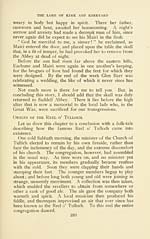 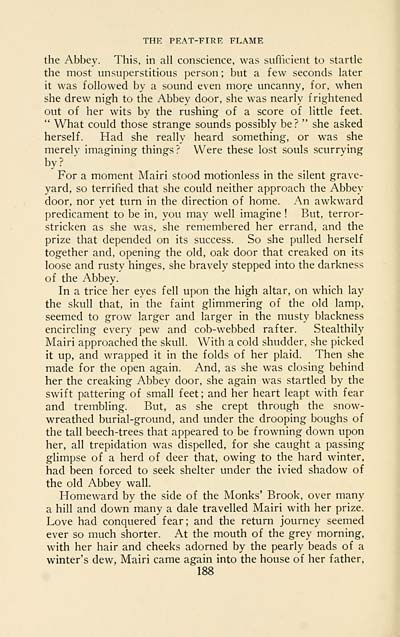 THE PEAT-FIRE FLAME
the Abbey. This, in all conscience, was sufficient to startle
the most unsuperstitious person ; but a few seconds later
it was followed by a sound even more uncanny, for, when
she drew nigh to the Abbey door, she was nearly frightened
out of her wits by the rushing of a score of little feet.
" What could those strange sounds possibly be? " she asked
herself. Had she really heard something, or was she
merely imagining things ? Were these lost souls scurrying
by?
For a moment Mairi stood motionless in the silent grave-
yard, so terrified that she could neither approach the Abbey
door, nor yet turn in the direction of home. An awkward
predicament to be in, you may well imagine ! But, terror-
stricken as she was, she remembered her errand, and the
prize that depended on its success. So she pulled herself
together and, opening the old, oak door that creaked on its
loose and rusty hinges, she bravely stepped into the darkness
of the Abbey.
In a trice her eyes fell upon the high altar, on which lay
the skull that, in the faint glimmering of the old lamp,
seemed to grow larger and larger in the musty blackness
encircling every pew and cob-webbed rafter. Stealthily
Mairi approached the skull. With a cold shudder, she picked
it up, and wrapped it in the folds of her plaid. Then she
made for the open again. And, as she was closing behind
her the creaking Abbey door, she again was startled by the
swift pattering of small feet; and her heart leapt v^-ith fear
and trembling. But, as she crept through the snow-
wreathed burial-ground, and under the drooping boughs of
the tall beech-trees that appeared to be frowning down upon
her, all trepidation was dispelled, for she caught a passing
glimpse of a herd of deer that, owing to the hard winter.
had been forced to seek shelter under the ivied shadow of
the old Abbey wall.
Homeward by the side of the Monks' Brook, over many
a hill and down many a dale travelled Mairi with her prize.
Love had conquered fear; and the return journey seemed
ever so much shorter. At the mouth of the grey morning,
with her hair and cheeks adorned by the pearly beads of a
winter's dew, Mairi came again into the house of her father,
188