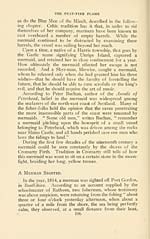 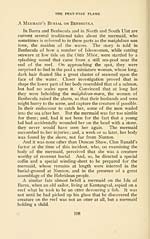 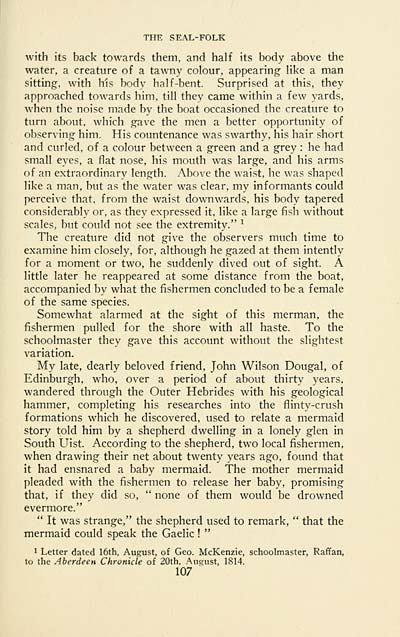 THE SEAL-FOLK
with its back towards them, and half its body above the
water, a creature of a tawny colour, appearing like a man
sitting, with his body half -bent. Surprised at this, they
approached towards him, till they came within a few yards,
when the noise made bv the boat occasioned the creature to
turn about, which gave the men a better opportunity of
observing him. His countenance was swarthy, his hair short
and curled, of a colour between a green and a grey : he had
small eyes, a flat nose, his mouth was large, and his arms
of an extraordinary length. Above the waist, he was shaped
like a man, but as the water was clear, my informants could
perceive that, from the waist downwards, his body tapered
considerably or, as they expressed it, like a large fish without
scales, but could not see the extremity." ^
The creature did not give the observers much time to
examine him closely, for, although he gazed at them intently
for a moment or two, he suddenly dived out of sight. A
little later he reappeared at some distance from the boat,
accompanied by what the fishermen concluded to be a female
of the same species.
Somewhat alarmed at the sight of this merman, the
fishermen pulled for the shore with all haste. To the
schoolmaster they gave this account without the slightest
variation.
My late, dearly beloved friend, John Wilson Dougal, of
Edinburgh, who, over a period of about thirty years,
wandered through the Outer Hebrides with his geological
hammer, completing his researches into the flinty-crush
formations which he discovered, used to relate a mermaid
story told him by a shepherd dwelling in a lonely glen in
South Uist. According to the shepherd, two local fishermen,
when drawing their net about twenty years ago, found that
it had ensnared a baby mermaid. The mother mermaid
pleaded with the fishermen to release her baby, promising
that, if they did so, " none of them would be drowned
evermore."
" It was strange," the shepherd used to remark, " that the
mermaid could speak the Gaelic ! "
1 Letter dated 16th, August, of Geo. McKenzie, schoolmaster, Raffan,
to the Aberdeen Chronicle of 20th, August, 1814.
107