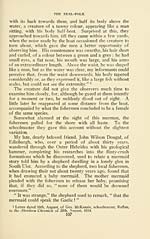 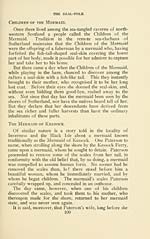 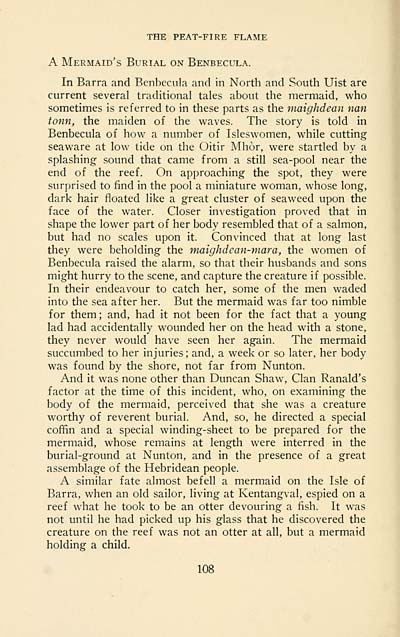 THE PEAT-FIRE FLAME
A Mermaid's Burial on Benbecula.
In Barra and Benbecula and in North and South Uist are
current several traditional tales about the mermaid, who
sometimes is referred to in these parts as the maighdean nan
tonn, the maiden of the waves. The story is told in
Benbecula of how a number of Isleswomen, while cutting
seaware at low tide on the Oitir Mhor, were startled by a
splashing sound that came from a still sea-pool near the
end of the reef. On approaching the spot, they were
surprised to find in the pool a miniature woman, whose long,
dark hair floated like a great cluster of seaweed upon the
face of the water. Closer investigation proved that in
shape the lower part of her body resembled that of a salmon,
but had no scales upon it. Convinced that at long last
they were beholding the maighdean-mara, the women of
Benbecula raised the alarm, so that their husbands and sons
might hurry to the scene, and capture the creature if possible.
In their endeavour to catch her, some of the men waded
into the sea after her. But the mermaid was far too nimble
for them ; and, had it not been for the fact that a young
lad had accidentally wounded her on the head with a stone,
they never would have seen her again. The mermaid
succumbed to her injuries ; and, a week or so later, her body
was found by the shore, not far from Nunton.
And it was none other than Duncan Shaw, Clan Ranald's
factor at the time of this incident, who, on examining the
body of the mermaid, perceived that she was a creature
worthy of reverent burial. And, so, he directed a special
coffin and a special winding-sheet to be prepared for the
mermaid, whose remains at length were interred in the
burial-ground at Nunton, and in the presence of a great
assemblage of the Hebridean people.
A similar fate almost befell a mermaid on the Isle of
Barra, when an old sailor, living at Kentangval, espied on a
reef what he took to be an otter devouring a fish. It was
not until he had picked up his glass that he discovered the
creature on the reef was not an otter at all, but a mermaid
holding a child.
108