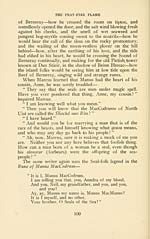 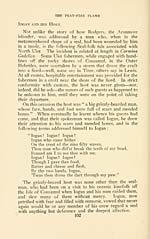 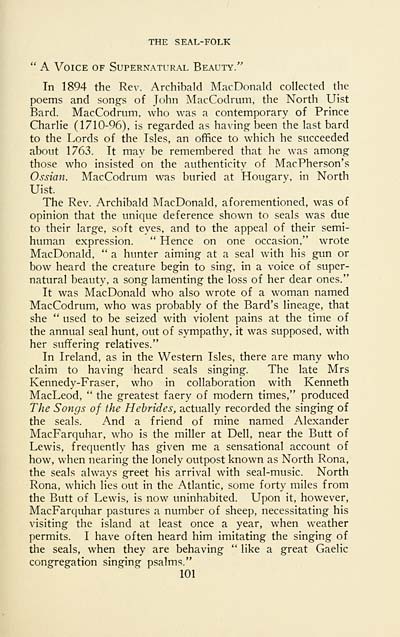 THE SEAL-FOLK
" A Voice of Supernatural Beauty."
In 1894 the Rev. Archibald MacDonald collected the
poems and songs of John MacCodrum. the North Uist
Bard. MacCodrum, who was a contemporary of Prince
Charlie (1710-96), is regarded as having been the last bard
to the Lords of the Isles, an office to which he succeeded
about 1763. It may be remembered that he was among
those who insisted on the authenticity of MacPherson's
Ossian. MacCodrum was buried at Hougary, in North
Uist.
The Rev. Archibald MacDonald, aforementioned, was of
opinion that the unique deference shown to seals was due
to their large, soft eyes, and to the appeal of their semi-
human expression. " Hence on one occasion," wrote
MacDonald, " a hunter aiming at a seal with his gim or
bow heard the creature begin to sing, in a voice of super-
natural beauty, a song lamenting the loss of her dear ones."
It was MacDonald who also wrote of a woman named
MacCodrum, who was probably of the Bard's lineage, that
she " used to be seized with violent pains at the time of
the annual seal hunt, out of sympathy, it was supposed, with
her suffering relatives."
In Ireland, as in the Western Isles, there are many who
claim to having heard seals singing. The late Mrs
Kennedy-Fraser, who in collaboration with Kenneth
MacLeod, " the greatest faery of modern times," produced
The Songs of the Hebrides, actually recorded the singing of
the seals. And a friend of mine named Alexander
MacFarquhar, who is the miller at Dell, near the Butt of
Lewis, frequently has given me a sensational account of
how, when nearing the lonely outpost known as North Rona,
the seals always greet his arrival with seal-music. North
Rona, which lies out in the Atlantic, some forty miles from
the Butt of Lewis, is now uninhabited. Upon it, however,
MacFarquhar pastures a number of sheep, necessitating his
visiting the island at least once a year, when weather
permits. I have often heard him imitating the singing of
the seals, when they are behaving " like a great Gaelic
congregation singing psalms."
101