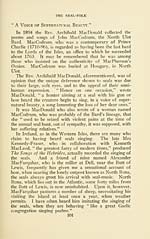 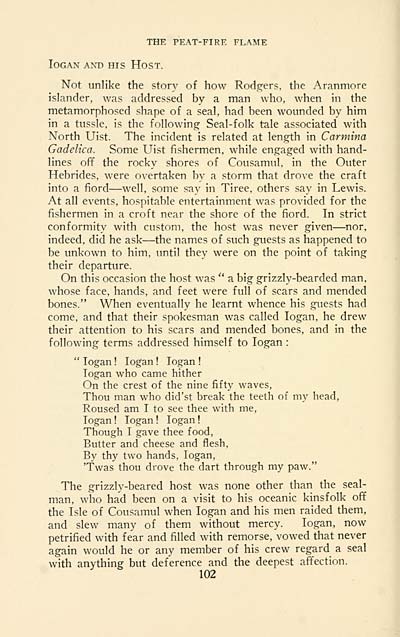 THE PEAT-FIRE FLAME
lOGAN AND HIS HoST.
Not unlike the story of how Rodgers. the Aranmore
islander, was addressed by a man who, when in the
metamorphosed shape of a seal, had been wounded by him
in a tussle, is the following Seal-folk tale associated with
North Uist. The incident is related at length in Carmina
Gadelica. Some Uist fishermen, while engaged with hand-
lines off the rocky shores of Cousamul. in the Outer
Hebrides, were overtaken by a storm that drove the craft
into a fiord — well, some say in Tiree. others say in Lewis.
At all events, hospitable entertainment was provided for the
fishermen in a croft near the shore of the fiord. In strict
conformity with custom, the host was never given — nor.
indeed, did he ask — the names of such guests as happened to
be unkown to him, until they were on the point of taking
their departure.
On this occasion the host was " a big grizzly-bearded man.
whose face, hands, and feet were full of scars and mended
bones." When eventually he learnt whence his guests had
come, and that their spokesman was called logan, he drew
their attention to his scars and mended bones, and in the
following terms addressed himself to logan :
" logan ! logan ! logan !
Togan who came hither
On the crest of the nine fifty waves,
Thou man who did'st break the teeth of my head,
Roused am I to see thee with me,
logan ! logan ! logan !
Though I gave thee food.
Butter and cheese and flesh.
By thy two hands, logan,
'Twas thou drove the dart through my paw."
The grizzly-beared host was none other than the seal-
man, who had been on a visit to his oceanic kinsfolk off
the Isle of Cousamul when logan and his men raided them,
and slew many of them without mercy. logan, now
petrified with fear and filled with remorse, vowed that never
again would he or any member of his crew regard a seal
with anything but deference and the deepest affection.
102