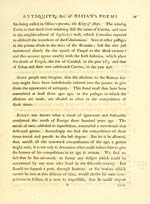 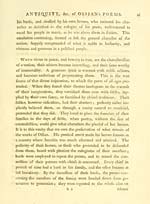 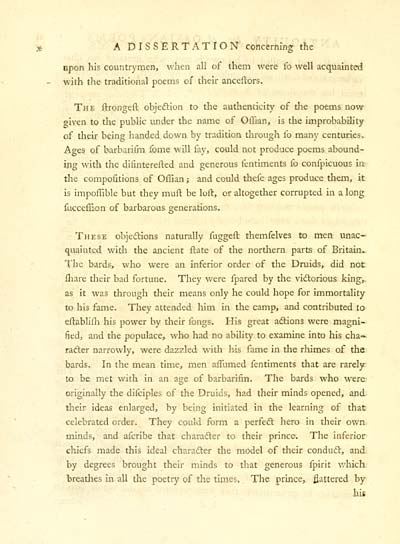 A DISSERTATION concerning the
upon his countrymen, when all of them were fo well acquainted
with the traditional poems of their ancellors.
The ftrongeft objeftion to the authenticity of the poems now
given to the public under the name of Oflian, is the improbability
of their being handed down by tradition through fo many centuries.
Ages of barbarifm fome will fay, could not produce poems abound-
ing with the dilinterefted and generous fentiments fo confpicuous ia
the compofitions of Oflian ; and could thefe ages produce them, it
is impoflible but they muft be lofl, or altogether corrupted in a long
{liccefllon of barbarous generations.
These objeftions naturally fuggeft themfelves to men unac-
quainted with the ancient ftate of the northern parts of Britain^
I'he bards, who were an inferior order of the Druids, did not
fliare their bad fortune. They were fpared by the vidlorious king-,,
as it was through their means only he could hope for immortality
to his fame. They attended liim in the camp, and contributed to
eftabhfli his power by their fongs. His great adtions were magni-
fied, and the populace, who had no ability to examine into his cha-
ratter narrowly, were dazzled witli his fame in the rhimes of the
bards. In the mean time, men aflumed fentiments that are rarely
to be met with in an age of barbarifm. The bards who were
originally the difciples of the Druids, had their minds opened, and.
their ideas enlarged, by being initiated in the learning of that
celebrated order. They could form a perfedt hero in their own.
minds, and afcribe that charadler to their prince. The inferior
chiefs made this ideal characfler the model of their condudl, and
by degrees brought their minds to that generous fpirit which
breathes in all the poetry of the times. The prince, flattered by
his