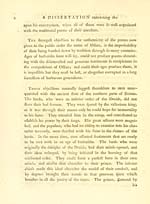 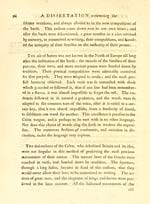 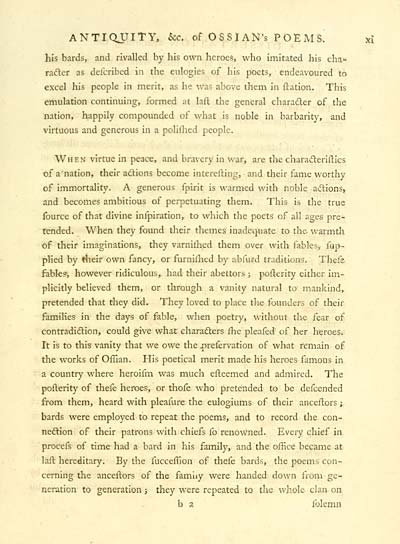 ANTIQJJITY, &c. of OSSIAN's POEMS.
his bards, and rivalled by his own heroes, who imitated his cha-
radler as delcribed in the eulogies of his poets, endeavoured to
excel his people in merit, as he was above them in ftation. This
emulation continuing, formed at laft the general charader of the
nation, happily compounded of what is noble in barbarity, and
virtuous and generous in a poliflied people.
When virtue in peace, and bravery in war, are the charaiteriftics
of a'nation, their adlions become interefting, and their fame worthy
of immortality. A generous fpirit is warmed with noble aiftions>
and becomes ambitious of perpetuating them. This is the true
fource of that divine infpiration, to which the poets of all ages pre-
tended. When they found their themes inadequate to the- warmtli
of their imaginations, they varnilhed them over with fables, fup-
plied by «heir own fancy, or furniHied by abfurd traditions. Thefe
fabk?, however ridiculous, had their abettors ; pofterity either im-
plicitly believed them, or through a vanity natural to mankind,
pretended that they did. They loved to place the founders of their
families in the days of fable, when poetry, without the fear of
contradidllon, could give what charafters fhe pleafed of her heroes.
It is to this vanity that we owe the prefervation of what remain of
the works of Ofllan. His poetical merit made his heroes famous in
a country where heroifm was much efteemed and admired. The
pofterity of thefe heroes, or thofe who pretended to be defcended
from them, heard with pleafure the eulogiums of their anceftors ;
bards were employed to repeat the poems, and to record the con-
nexion of their patrons with chiefs fo renowned. Every chief in
procefs of time had a bard in his family, and the office became at
laft hereditary. By the fucceffion of thefe bards, the poems con-
cerning the anceftors of the famiiy were handed down from ge-
neration to generation j they were repeated to the whole clan on
b a folemn
XI