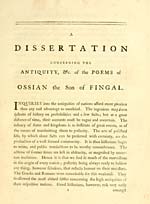 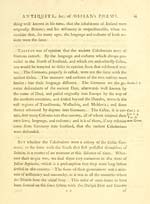 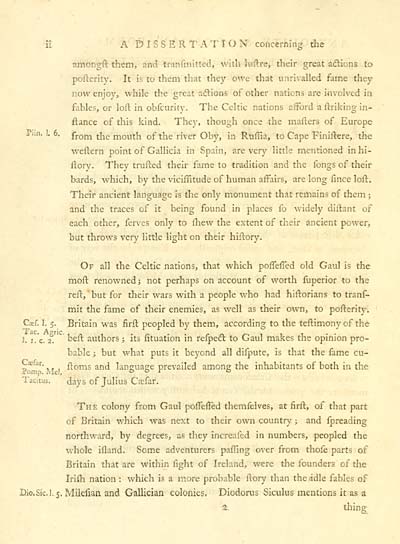 u A D I S S E R T A T I O N concerning the
amongft them, and tranfmitted, with luflre, their great adlions to
pofterity. It is to them that they owe that unrivalled fame they
now en)ov, while the great adions of other nations are involved in
fables, or loft in obfcurity. The Celtic nations afford a ftriking in-
ftance of this kind. They, though once the mafters of Europe
rmi. !. 6, fj.Qj^ ^i^g mouth of the river Oby, in Rnffia, to Cape Finiftere, the
weftern point of Gallicia in Spain, are very little mentioned inhi-
ftory. They trufted their fame to tradition and the fongs of their
bards, which, by the viciffitude of human affairs, are long fince loft.
Their ancient language is the only monument that remains of them ;
and the traces of it being found in places fo widely diftant of
each other, ferves only to fliew the extent of their ancient power,
but throws very little light on their hiftory.
Of all the Celtic nations, that which poffeffed old Gaul is the
moft renowned J not perhaps on account of worth fuperior to the
reft, but for their wars with a people who had hiftorians to tranf-
mit the fame of their enemies, as well as their own, to pofterity.
Csef. 1. 5. Britain was firft peopled by them, according to the teftimony of the
J. I.e. 2. heft authors ; its fituation in refpedt to Gaul makes the opinion pro-
bable ; but what puts it beyond all difpute, is that the fame cu-
P • J. , ftoms and language prevailed among the inhabitants of both in the
Tacitus. days of Julius Csfar.
The colony from Gaul poffeffed themfelves, at firft, of that part
of Britain which was next to their own country ; and fpreading
northward, by degrees, as they increafed in numbers, peopled the
whole ifland. Some adventurers paffing over from thofe parts of
Britain that are within fight of Ireland, were the founders of the
Irifti nation : which is a more probable ftory than the idle fables of
Dio.Sic.1.5. Milefian and Gallician colonies. Diodorus Siculus mentions it as a
2. thing