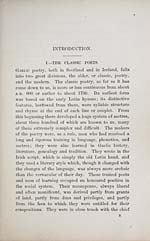 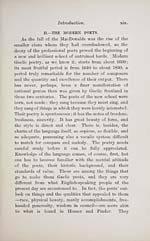 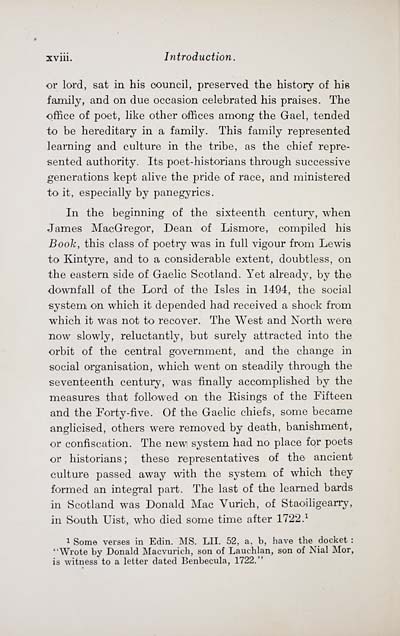 xviii. Introductìon.
or lord, sat in his council, preserved the history of his
family, and on due occasion celebrated his praises. The
office of poet, hke other offices among the Gael, tended
to be hereditary in a family. This family represented
learning and culture in the tribe, as the chief repre-
sented authority. Its poet-historians through successive
generations kept ahve the pride of race, and ministered
to it, especially by panegyrics.
In the beginning of the sixteenth century, M^hen
James MacGregor, Dean of Lismore, compiled his
Booh, this class of poetiy was in full vigour from Lewis
to Kintyre, and to a considerable extent, doubtless, on
the eastern side of Gaehc Scotland. Yet aheady, by the
downfall of the Lord of the Isles in 1494, the social
system on which it depended had received a shock from
which it was not to recover. The West and North were
now slowly, reluctantly, but surely attracted into the
orbit of the central government, and the change in
social organisation, which went on steadily through the
seventeenth century, was finally accomplished by the
measures that followed on the Eisings of the Fifteen
and the Forty-five. Of the Gaehc chiefs, some became
anghcised, others were removed by death, banishment,
or confiscation. The new system had no place fqr poets
or historians; these representatives of the ancient
culture passed away with the system of which they
formed an integral part. The last of the leamed bards
in Scotland was Donald Mac Vurich, of Staoiligearry,
in South Uist, who died some time after 1722.^
1 Some verses in Edin. MS. LII. 52, a, b, have the docket :
"Wrote by Donald Macvurich, son of Lauchlan, son of Nial Mor,
is witness to a letter dated Benbecula, 1722."