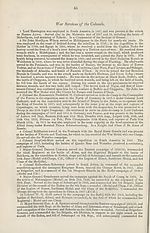 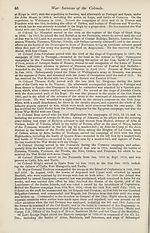 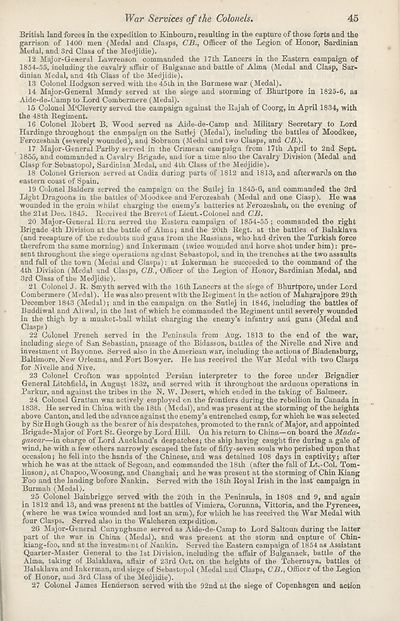 45
War Services of the Colonels.
British land forces in the expedition to Kinbourn, resulting in the capture of those forts and the
garrison of 1400 men (Medal and Clasps, CB., Officer of the Legion of Honor, Sardinian
Medal, and 3rd Class of the Medjidie).
12 Major-General Lawreuson commanded the 17th Lancers in the Eastern campaign of
1854-55, including the cavalry affair of Bulganac and battle of Alma (Medal and Clasp, Sar¬
dinian Medal, and 4th Class of the Medjidie).
13 Colonel Hodgson served with the 45th in the Burmese war (Medal).
14 Major-General Mundy served at the siege and storming of Bhurtpore in 1825-6, as
Aide-de-Camp to Lord Combermere (Medal).
15 Colonel M‘Cleverty served the campaign against the Rajah of Coorg, in April 1834, with
the 48 th Regiment.
16 Colonel Robert B. Wood served as Aide-de-Camp and Military Secretary to Lord
Hardinge throughout the campaign on the Sutlej (Medal), including the battles of Moodkee,
Ferozeshah (severely wounded), and Sobraon (Medal and two Clasps, and CB.).
17 Major-General Parlby served in the Crimean campaign from 17th April to 2nd Sept.
1855, and commanded a Cavalry Brigade, and for a time also the Cavalry Division (Medal and
Clasp for Sebastopol, Sardinian Medal, and 4th Class of the Medjidie).
18 Colonel Grierson served at Cadiz during parts of 1812 and 1813, and afterwards on the
eastern coast of Spain.
19 Colonel Balders served the campaign on the Sutlej in 1845-6, and commanded the 3rd
Light Dragoons in the battles of Moodkee and Ferozeshah (Medal and one Clasp). He was
wounded in the groin whilst charging the enemy’s batteries at Ferozeshah, on the evening of
the 21st Deo. 1845. Received the Brevet of Lieut.-Colonel and CB.
20 Major-General Horn served the Eastern campaign of 1854-55 ; commanded the right
Brigade 4th Division at the battle of Alma; and the 20th Regt. at the battles of Balaklava
(and recapture of the redoubts and guns from the Russians, who had driven the Turkish force
therefrom the same morning) and Inkermam (twice wounded and horse shot under him): pre¬
sent throughout the siege operations against Sebastopol, and in the trenches at the two assaults
and fall of the town (Medal and Clasps): at lukerman he succeeded to the command of the
4th Division (Medal and Clasps, CB., Officer of the Legion of Honor, Sardinian Medal, and
3rd Class of the Medjidie).
21 Colonel J. R. Smyth served with the 16th Lancers at the siege of Bhurtpore, under Lord
Combermere (Medal). He was also present with the Regiment in the action of Maharajpore 29 th
December 1843 (Medal); and in the campaign on the Sutlej in 1846, including the battles of
Buddiwal and Aliwal, in the last of which he commanded the Regiment until severely wounded
in the thigh by a musket-ball whilst charging the enemy’s infantry and guns (Medal and
Clasps)
22 Colonel French served in the Peninsula from Aug. 1813 to the end of the war,
including siege of San Sebastian, passage of the Bidassoa, battles of the Nivelle and Nive and
investment of Bayonne. Served also in the American war, including the actions of Bladensburg,
Baltimore, New Orleans, and Fort Bowyer. He has received the War Medal with two Clasps
for Nivelle and Nive.
23 Colonel Crofton was appointed Persian interpreter to the force under Brigadier
General Litchfield, in August 1832, and served with it throughout the arduous operations in
Parkur, and against the tribes in the N. W. Desert, which ended in the taking of Balmeer.
24 Colonel Grattan was actively employed on the frontiers during the rebellion in Canada in
1838. He served in China with the 18th (Medal), and was present at the storming of the heights
above Canton, and led the advance against the enemy’s entrenched camp, for which he was selected
by Sir Hugh Gough as the bearer of his despatches, promoted to the rank of Major, and appointed
Brigade-Major of Fort St. George by Lord Hill. On his return to China—on board the Mada¬
gascar—in charge of Lord Auckland’s despatches; the ship having caught fire during a gale of
wind, he with a few others narrowly escaped the fate of fifty-seven souls who perished upon that
occasion; he fell into the hands of the Chinese, and was detained 108 days in captivity; after
which he was at the attack of Segoan, and commanded the 18th (after the fall of Lt.-Col. Tom¬
linson), at Chapoo, Woosung, and Changhai; and he was present at the storming of Chin Kiang
Foo and the landing before Nankin. Served with the 18th Royal Irish in the last campaign in
Burmah (Medal).
25 Colonel Bainbrigge served with the 20th in the Peninsula, in 1808 and 9, and again
in 1812 and 13, and was present at the battles of Vimiera, Corunna, Victoria, and the Pyrenees,
(where he was twice wounded and lost an arm), for which he has received the War Medal with
four Clasps. Served also in the Walcheren expedition.
26 Major-General Cunynghame served as Aide-de-Camp to Lord Saltoun during the latter
part of the war in China (Medal), and was present at the storm and capture of Chin-
kiang-foo, and at the investment of Nankin. Served the Eastern campaign of 1854 as Assistant
Quarter-Master General to the 1st Division, including the affair of Bulganack, battle of the
Alma, taking of Balaklava, affair of 23rd Oct. on the heights of the Tchernaya, battles of
Balaklava and Inkerman, and siege of Sebastopol (Medal and Clasps, CB., Officer of the Legion
of Honor, and 3rd Class of the Medjidie).
27 Colonel James Henderson served with the 92nd at the siege of Copenhagen and action