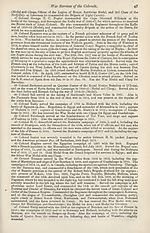 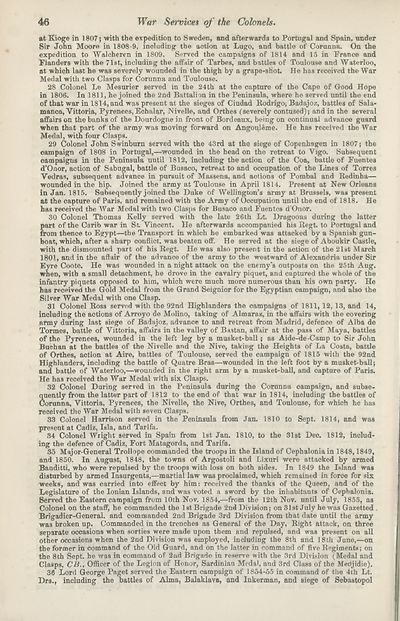 46
War Services of the Colonels.
at Kioge in 1807; with the expedition to Sweden, and afterwards to Portugal and Spain, under
Sir John Moore in 1808-9, including the action at Lugo, and battle of Corunna. On the
expedition to Walcheren in 1809. Served the campaigns of 1814 and 15 in France and
Flanders with the 71st, including the affair of Tarbes, and battles of Toulouse and Waterloo,
at which last he was severely wounded in the thigh by a grape-shot He has received the War
Medal with two Clasps for Corunna and Toulouse.
28 Colonel Le Mesurier served in the 24th at the capture of the Cape of Good Hope
in 1806. In 1811, he joined the 2nd Battalion in the Peninsula, where he served until the end
of that war in 1814, and was present at the sieges of Ciudad Kodrigo, Badajoz, battles of Sala¬
manca, Vittoria, Pyrenees,Echalar, Nivelle, and Orthes (severely contused); and in the several
affairs on the banks of the Dourdogne in front of Bordeaux, being on continual advance guard
when that part of the army was moving forward on Angouleme. He has received the War
Medal, with four Clasps.
29 Colonel John Swinburn served with the 43rd at the siege of Copenhagen in 1807; the
campaign of 1808 in Portugal,—wounded in the head on the retreat to Vigo. Subsequent
campaigns in the Peninsula until 1812, including the action of the Coa, battle of Fuentes
d’Onor, action of Sabugal, battle of Busaco, retreat to and occupation of the Lines of Torres
Vedras, subsequent advance in pursuit of Massena, and actions of Pombal and Redinha—
wounded in the hip. Joined the army at Toulouse in April 1814. Present at New Orleans
in Jan. 1815. Subsequently joined the Duke of Wellington’s army at Brussels, was present
at the capture of Paris, and remained with the Army of Occupation until the end of 1818. He
has received the War Medal with two Clasps for Busaco and Fuentes d'Onor.
30 Colonel Thomas Kelly served with the late 26th Lt. Dragoons during the latter
part of the Carib war in St. Vincent. He afterwards accompanied his Regt. to Portugal and
from thence to Egypt—the Transport in which he embarked was attacked by a Spanish gun¬
boat, which, after a sharp conflict, was beaten off. He served at the siege of Aboukir Castle,
with the dismounted part of his Regt. He was also present in the action of the 21»t March
1801, and in the affair of the advance of the army to the westward of Alexandria under Sir
Eyre Coote. He was wounded in a night attack on the enemy's outposts on the 25th Aug.
when, with a small detachment, he drove in the cavalry piquet, and captured the whole of the
infantry piquets opposed to him, which were much more numerous than his own party. He
has received the Gold Medal from the Grand Seignior for the Egyptian campaign, and also the
Silver War Medal with one Clasp.
31 Colonel Ross served with the 92nd Highlanders the campaigns of 1811, 12,13, and 14,
including the actions of Arroyo de Molino, taking of Almaraz, in the affairs with the covering
army during last siege of Badajoz, advance to and retreat from Madrid, defence of Alba de
Tormes, battle of Vittoria, affairs in the valley of Bastan, affair at the pass of Maya, battles
of the Pyrenees, wounded in the left leg by a musket-ball ; as Aide-de-Camp to Sir John
Buchan at the battles of the Nivelle and the Nive, taking the Heights of La Costa, battle
of Orthes, action at Aire, battles of Toulouse, served the campaign of 1815 with the 92nd
Highlanders, including the battle of Quatre Bras—wounded in the left foot by a musket-ball;
and battle of Waterloo,—wounded in the right arm by a musket-ball, and capture of Paris.
He has received the War Medal with six Clasps.
32 Colonel During served in the Peninsula during the Corunna campaign, and subse¬
quently from the latter part of 1812 to the end of that war in 1814, including the battles of
Corunna, Vittoria, Pyrenees, the Nivelle, the Nive, Orthes, and Toulouse, for which he has
received the War Medal with seven Clasps.
33 Colonel Harrison served in the Peninsula from Jan. 1810 to Sept. 1814, and was
present at Cadiz, Isla, and Tarifa.
34 Colonel Wright served in Spain from 1st Jan. 1810, to the 31st Dec. 1S12, includ¬
ing the defence of Cadiz, Fort Matagorda, and Tarifa.
35 Major-General Trollope commanded the troops in the Island of Cephaloniain 1848,1849,
and 1850. In August, 1848, the towns of Argostoli and Lixuri were attacked by armed
Banditti, who were repulsed by the troops with loss on both sides. In 1849 the Island was
disturbed by armed Insurgents,—martial law was proclaimed, which remained in force for six
weeks, and was carried into effect by him: received the thanks of the Queen, and of the
Legislature of the Ionian Islands, and was voted a sword by the inhabitants of Cephalonia.
Served the Eastern campaign from 10th Nov. 1854,—from the 12th Nov. until July, 1855, as
Colonel on the staff, he commanded the 1st Brigade 2nd Division; on 31st July he was Gazetted
Brigadier-General, and commanded 2nd Brigade 3rd Division from that date until the army
was broken up. Commanded in the trenches as General of the Day, Right attack, on three
separate occasions when sorties were made upon them and repulsed, and was present on all
other occasions when the 2nd Division was employed, including the 8th and 18th June,—on
the former in command of the Old Guard, and on the latter in command of five Regiments; on
the 8th Sept, he was in command of 2nd Brigade in reserve with the 3rd Division (Medal and
Clasps, CB., Officer of the Legion of Honor, Sardinian Medal, and 3rd Class of the Medjidie).
36 Lord George Paget served the Eastern campaign of 1854-55 in command of the 4th Lt.
Drs., including the battles of Alma, Balaklava, and Inkerman, and siege of Sebastopol