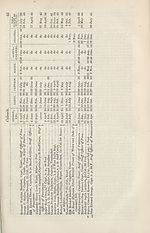 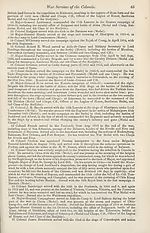 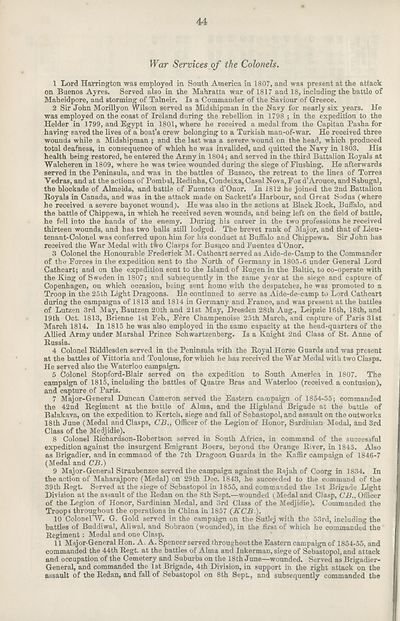 44
War Services of the Colonels.
1 Lord Harrington was employed in South America in 1807, and was present at the attack
on Buenos Ayres. Served also in the Mahratta war of 1817 and 18, including the battle of
Maheidpore, and storming of Talneir. Is a Commander of the Saviour of Greece.
2 Sir John Morillyon Wilson served as Midshipman in the Navy for nearly six years. He
was employed on the coast of Ireland during the rebellion in 1798 ; in the expedition to the
Helder in 1799, and Egypt in 1801, where he received a medal from the Capitan Pasha for
having saved the lives of a boat’s crew belonging to a Turkish man-of-war. He received three
wounds while a Midshipman ; and the last was a severe wound on the head, which produced
total deafness, in consequence of which he was invalided, and quitted the Navy in 1803. His
health being restored, he entered the Army in 1804; and served in the third Battalion Boyals at
Walcheren in 1809, where he was twice wounded during the siege of Plushing. He afterwards
served in the Peninsula, and was in the battles of Busaco, the retreat to the lines of Torres
Vedras, and at the actions of Pombal, Redinha, Condeixa, Casal Nova, Foz d’Arouce, and Sabugal,
the blockade of Almeida, and battle of Puentes d'Onor. In 1812 he joined the 2nd Battalion
Royals in Canada, and was in the attack made on Sackett’s Harbour, and Great Sodus (where
he received a severe bayonet wound). He was also in the actions at Black Rock, Buffalo, and
the battle of Chippewa, in which he received seven wounds, and being left on the field of battle,
he fell into the hands of the enemy. During his career in the two professions he received
thirteen wounds, and has two balls still lodged. The brevet rank of Major, and that of Lieu¬
tenant-Colonel was conferred upon him for his conduct at Buffalo and Chippewa. Sir John has
received the War Medal with tivo Clasps for Busaco and Puentes d’Onor.
3 Colonel the Honourable Frederick M. Cathcart served as Aide-de-Camp to the Commander
of the Forces in the expedition sent to the North of Germany in 1805-6 under General Lord
Cathcart; and on the expedition sent to the Island of Rugen in the Baltic, to co-operate with
the King of Sweden in 1807; and subsequently in the same year at the siege and capture of
Copenhagen, on which occasion, being sent home with the despatches, he was promoted to a
Troop in the 25th Light Dragoons. He continued to serve as Aide-de-camp to Lord Cathcart
during the campaigns of 1813 and 1814 in Germany and France, and was present at the battles
of Lutzen 3rd May, Bautzen 20th and 21st May, Dresden 28th Aug., Leipzic 16th, 18th, and
19th Oct. 1813, Brienne 1st Feb., Fere Champenoise 25th March, and capture of Paris 31st
March 1814. In 1815 he was also employed in the same capacity at the head-quarters of the
Allied Army under Marshal Prince Schwartzenberg. Is a Knight 2nd Class of St. Anne of
Russia.
4 Colonel Riddlesden served in the Peninsula with the Royal Horse Guards and was present
at the battles of Vittoria and Toulouse, for which he has received the War Medal with two Clasps.
He served also the Waterloo campaign.
5 Colonel Stopford-Blair served on the expedition to South America in 1807. The
campaign of 1815, including the battles of Quatre Bras and Waterloo (received a contusion),
and capture of Paris.
7 Major-General Duncan Cameron served the Eastern campaign of 1854-55; commanded
the 42nd Regiment at the battle of Alma, and the Highland Brigade at the battle of
Balakava, on the expedition to Kertch, siege and fall of Sebastopol, and assault on the outworks
18th June (Medal and Clasps, CB., Officer of the Legion of Honor, Sardinian Medal, and 3rd
Class of the Medjidie).
8 Colonel Richardson-Robertson served in South Africa, in command of the successful
expedition against the insurgent Emigrant Boers, beyond the Orange River, in 1845. Also
as Brigadier, and in command of the 7 th Dragoon Guards in the Kaffir campaign of 1846-7
(Medal and CB.)
9 Major-General Straubenzee served the campaign against the Rajah of Coorg in 1834. In
the action of Maharajpore (Medal) on 29th Dec. 1843, he succeeded to the command of the
39th Regt. Served at the siege of Sebastopol in 1855, and commanded the 1st Brigade Light
Division at the assault of the Redan on the 8th Sept.—wounded (Medal and Clasp, CB., Officer
of the Legion of Honor, Sardinian Medal, and 3rd Class of the Medjidie). Commanded the
Troops throughout tbe operations in China in 1857 (KCB ).
10 ColonelAY. G. Gold served in the campaign on the Sutlej with the 53rd, including the
battles of Buddiwal, Aliwal, and Sobraoa (wounded), in the first of which he commanded the
Regiment : Medal and one Clasp.
11 Msjor-General Hon. A. A. Spencer served throughout the Eastern campaign of 1854-55, and
commanded the 44th Regt. at the battles of Alma and Inkerman, siege of Sebastopol, and attack
and occupation of the Cemetery and Suburbs on the 18th June—wounded. Served as Brigadier-
General, and commanded the 1st Brigade, 4th Division, in support in the right attack on the
assault of the Redan, and fall of Sebastopol on 8th Sept., and subsequently commanded the