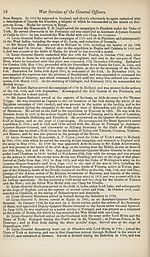 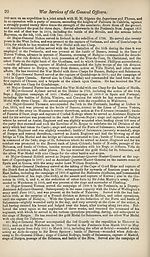 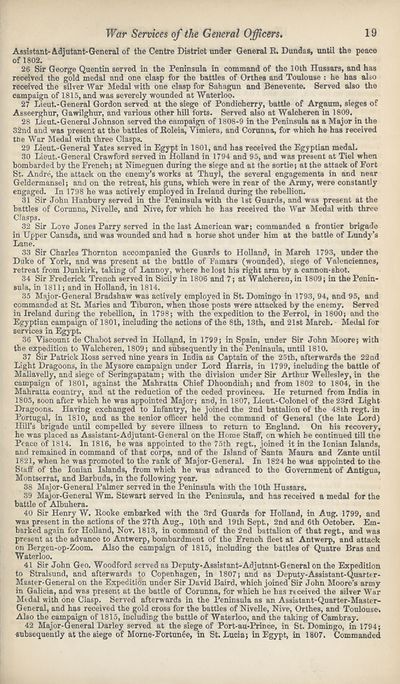 War Services of the General Officers. 19
Assistant-Adjutant-General of the Centre District under General B. Dundas, until the peace
of 1802.
26 Sir George Quentin served in the Peninsula in command of the 10th Hussars, and has
received the gold medal and one clasp for the battles of Orthes and Toulouse : he has aLo
received the silver War Medal with one clasp for Sahagun and Benevente. Served also the
campaign of 1815, and was severely wounded at Waterloo.
27 Lieut.-General Gordon served at the siege of Pondicherry, battle of Argaum, sieges of
Asseerghur, Gawilghur, and various other hill forts. Served also at Walcheren in 1809.
28 Lieut.-General Johnson served the campaign of 1808-9 in the Peninsula as a Major in the
32nd and was present at the battles of Roleia, Vimiera, and Corunna, for which he has received
the War Medal with three Clasps.
29 Lieut-Generai Yates served in Egypt in 1801, and has received the Egyptian medal.
30 Lieut.-General Crawford served in Holland in 1794 and 95, and was present at Tiel when
bombarded by the French; at Nimeguen during the siege and at the sortie; at the attack of Fort
St. Andre, the attack on the enemy’s works at Thuyl, the several engagements in and near
Geldermansel; and on the retreat, his guns, which were in rear of the Army, were constantly
engaged. In 1798 he was actively employed in Ireland during the rebellion.
31 Sir John Hanbury served in the Peninsula with the 1st Guards, and was present at the
battles of Corunna, Nivelle, and Nive, for which he has received the War Medal with three
Clasps.
32 Sir Love Jones Parry served in the last American war; commanded a frontier brigade
in Upper Canada, and was wounded and had a horse shot under him at the battle of Lundy’s
Lane.
33 Sir Charles Thornton accompanied the Guards to Holland, in March 1793, under the
Duke of York, and was present at the battle of Famars (wounded), siege of Valenciennes,
retreat from Dunkirk, taking of Lannoy, where he lost his right arm by a cannon-shot.
34 Sir Frederick Trench served in Sicily in 1806 and 7; at Walcheren, in 1809; in the Penin¬
sula, in 1811; and in Holland, in 1814.
35 Major-General Bradshaw was actively employed in St. Domingo in 1793, 94, and 95, and
commanded at St. Maries and Tiburon, when those posts were attacked by the enemy. Served
in Ireland during the rebellion, in 1798; with the expedition to the Ferrol, in 1800; and the
Egyptian campaign of 1801, including the actions of the 8th, 13th, and 21st March. Medal for
services in Egypt.
36 Viscount de Chabot served in Holland, in 1799; in Spain, under Sir John Moore; with
the expedition to Walcheren, 1809; and subsequently in the Peninsula, until 1810.
37 Sir Patrick Ross served nine years in India as Captain of the 25th, afterwards the 22nd
Light Dragoons, in the Mysore campaign under Lord Harris, in 1799, including the battle of
Mallavelly, and siege of Seringapatam; with the division under Sir Arthur Wellesley, in the
campaign of 1801, against the Mahratta Chief Dhoondiah; and from 1802 to 1804, in the
Mahratta country, and at the reduction of the ceded provinces. He returned from India in
1805, soon after which he was appointed Major; and, in 1807, Lieut.-Colonel of the 23rd Light
Dragoons. Having exchanged to Infantry, he joined the 2nd battalion of the 48th regt. in
Portugal, in 1810, and as the senior officer held the command of General (the late Lord)
Hill’s brigade until compelled by severe illness to return to England. On his recovery,
he was placed as Assistant-Adjutant-General on the Horae Staff, on which he continued till the
Peace of 1814. In 1816, be was appointed to the 75th regt., joined it in the Ionian Islands,
and remained in command of that corps, and of the Island of Santa Maura and Zante until
1821, when he was promoted to the rank of Major-General. In 1824 he was appointed to the
Stuff of the Ionian Islands, from which he was advanced to the Government of Antigua,
Montserrat, and Barbuda, in the following year.
38 Major-General Palmer served in the Peninsula with the 10th Hussars.
39 Major-General Wm. Stewart served in the Peninsula, and has received a medal for the
battle of Albuhera.
40 Sir Henry W. Rooke embarked with the 3rd Guards for Holland, in Aug. 1799, and
was present in the actions of the 27th Aug., 10th and 19th Sept., 2nd and 6th October. Em¬
barked again for Holland, Nov. 1813, in command of the 2nd battalion of that regt., and was
present at the advance to Antwerp, bombardment of the French fleet at Antwerp, and attack
on Bergen-op-Zoom. Also the campaign of 1815, including the battles of Quatre Bras and
Waterloo.
41 Sir John Geo. Woodford served as Deputy-Assistant-Adjutant-General on the Expedition
to Stralsund, and afterwards to Copenhagen, in 1807; and as Deputy-Assistant-Quarter-
Master-General on the Expedition under Sir David Baird, which joined Sir John Moore’s army
in Galicia, and was present at the battle of Corunna, for which he has received the silver War
Medal with one Clasp. Served afterwards in the Peninsula as an Assistant-Quarter-Master-
General, and has received the gold cross for the battles of Nivelle, Nive, Orthes, and Toulouse.
Also the campaign of 1815, including the battle of Waterloo, and the taking of Cambray.
42 Major-General Darley served at the siege of Port-au-Prince, in St. Domingo, in 1794;
subsequently at the siege of Morne-Fortunee, in St. Lucia; in Egypt, in 1807. Commanded