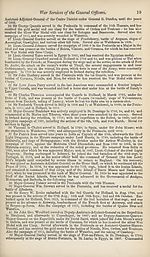 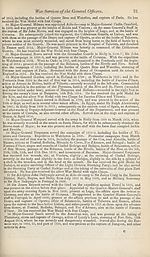 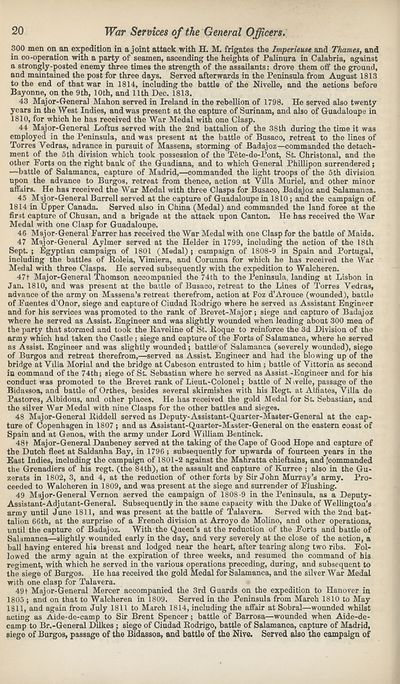 20
War Services of the General Officers.
300 men on an expedition in a joint attack with H. M. frigates the Imperieuse and Thames, and
in co-operation with a party of seamen, ascending the heights of Palinura in Calabria, against
a strongly-posted enemy three times the strength of the assailants: drove them off the ground,
and maintained the post for three days. Served afterwards in the Peninsula from August 1813
to the end of that war in 1814, including the battle of the Nivelle, and the actions before
Bayonne, on the 9th, 10th, and 11th Dec. 1813.
43 Major-Ceneral Mahon served in Ireland in the rebellion of 1798. He served also twenty
years in the West Indies, and was present at the capture of Surinam, and also of Guadaloupe in
1810, for which he has received the War Medal with one Clasp.
44 Major-General Loftus served with the 2nd battalion of the 38th during the time it was
employed in the Peninsula, and was present at the battle of Bnsaco, retreat to the lines of
Torres Vedras, advance in pursuit of Massena, storming of Badajoz—commanded the detach¬
ment of the 5th division which took possession of the Tete-de-Pont, St. Christonal, and the
other Forts on the right bank of the Guadiana, and to which General Phillipon surrendered j
—battle Of Salamanca, capture of Madrid,—commanded the light troops of the 5th division
upon the advance to Burgos, retreat from thence, action at Villa Muriel, and other minor
affairs. He has received the War Medal with three Clasps for Busaco, Badajoz and Salamanca.
45 Major-General Burrell served at the capture of Guadaloupe in 1810 ; and the campaign of
1814 in Upper Canada. Served also in China (Medal) and commanded the land force at the
first capture of Chusan, and a brigade at the attack upon Canton. He has received the War
Medal with one Clasp for Guadaloupe.
46 Major-General Farrer has received the War Medal with one Clasp for the battle of Maida.
47 Major-General Aylmer served at the Helder in 1799, including the action of the 18th
Sept, j Egyptian campaign of 1801 (Medal) ; campaign of 1808-9 in Spain and Portugal,
including the battles of Roleia, Vimiera, and Corunna for which he has received the War
Medal with three Clasps. He served subsequently with the expedition to Walcheren.
47t Major-General Thomson accompanied the 74th to the Peninsula, landing at Lisbon in
Jan. 1810, and was present at the battle of Busaco, retreat to the Lines of Torres Vedras,
advance of the army on Massena’s retreat therefrom, action at Foz d’Arouce (wounded), battle
of Fuentes d'Onor, siege and capture of Ciudad Rodrigo where he served as Assistant Engineer
and for his services was promoted to the rank of Brevet-Major; siege and capture of Badajoz
where he served as Assist. Engineer and was slightly wounded when leading about 300 men of
the party that stormed and took the Raveline of St. Roque to reinforce the 3d Division of the
army which had taken the Castle ; siege and capture of the Forts of Salamanca, where he served
as Assist. Engineer and was slightly wounded; battle of Salamanca (severely wounded), siege
of Burgos and retreat therefrom,—served as Assist. Engineer and had the blowing up of the
bridge at Vdla Morial and the bridge at Cabeson entrusted to him ; battle of Vittoria as second
in command of the 74th; siege of St. Sebastian where he served as Assist -Engineer and for his
conduct was promoted to the Brevet rank of Lieut.-Colonel; battle of N vvelle, passage of the
Bidassoa, and battle of Orthes, besides several skirmishes with his Regt. at Alfiates, Villa de
Pastores, Albidous, and other places. He has received the gold Medal for St. Sebastian, and
the silver War Medal with nine Clasps for the other battles and sieges.
48 Major-General Riddell served as Deputy-Assistant-Quarter-Master-General at the cap¬
ture of Copenhagen in 1807 ; and as Assistant-Quarter-Master-General on the eastern coast of
Spain and at Genoa, with the army under Lord Wdliam Bentinck.
48t Major-General Daubeney served at the taking of the Cape of Good Hope and capture of
the Dutch fleet at Saldanha Bay, in 1796 ; subsequently for upwards of fourteen years in the
East Indies, including the campaign of 1801-2 against the Mahratta chieftains, and [commanded
the Grenadiers of his regt. (the 84th), at the assault and capture of Kurree ; also in the Gu-
zerats in 1802, 3, and 4, at the reduction of other forts by Sir John Murray’s army. Pro¬
ceeded to Walcheren in 1809, and was present at the siege and surrender of Flushing.
49 Major-General Vernon served the campaign of 1808-9 in the Peninsula, as a Deputy-
Assistant-Adjutant-General. Subsequently in the same capacity with the Duke of Wellington’s
army until June 1811, and was present at the battle of Talavera. Served with the 2nd bat¬
talion 66th, at the surprise of a French division at Arroyo de Molino, and other operations,
until the capture of Badajoz. With the Queen’s at the reduction of the Forts and battle of
Salamanca—slightly wounded early in the day, and very severely at the close of the action, a
ball having entered his breast and lodged near the heart, after tearing along two ribs. Fol¬
lowed the army again at the expiration of three weeks, and resumed the command of his
regiment, with which he served in the various operations preceding, during, and subsequent to
the siege of Burgos. He has received the gold Medal for Salamanca, and the silver War Medal
with one clasp for Talavera.
49f Major-General Mercer accompanied the 3rd Guards on the expedition to Hanover in
1805 ; and on that to Walcheren in 1809. Served in the Peninsula from March 1810 to May
1811, and again from July 1811 to March 1814, including the affair at Sobral—wounded whilst
acting as Aide-de-camp to Sir Brent Spencer ; battle of Barrosa—wounded when Aide-de-
camp to Br.-General Dilkes ; siege of Ciudad Rodrigo, battle of Salamanca, capture of Madrid,
siege of Burgos, passage of the Bidassoa, and battle of the Nive. Served also the campaign of