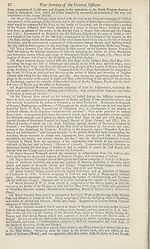 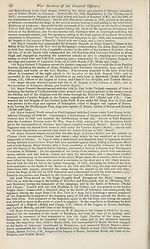 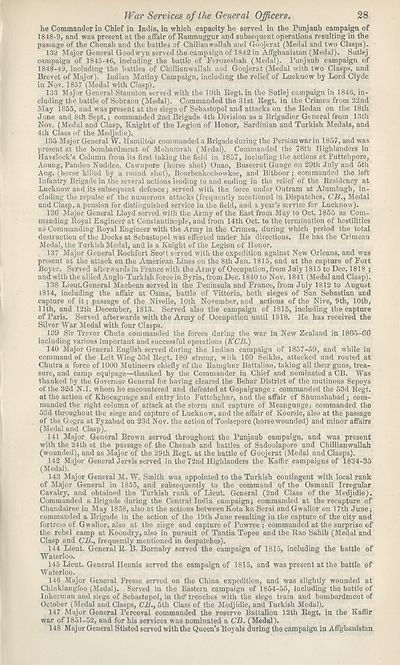 IVur Services of the General Officers. 28
he Commander in Chief in India, in which capacity ho served in the Punjaub campaign of
1848-9, and was present at the affair of Ramnuggur and subsequent operations resulting in the
passage of the Chenab and the battles of Chilian wallah aiid Ooiyerat (Medal and two Clasps).
132 Major General Goodwyn served the campaign of 1842 in AfFghanistan (Medal). Sutlej
campaign of 1845-46, including the battle of Ferozeshah (Medal). Punjaub campaign of
1848-49, including the battles of Chillianwallah and Goojerat (Medal with two Clasps, and
Brevet of Major). Indian Mutiny Campaign, including the relief of Lucknow by Lord Clyde
in Nov. 1857 (Medal with Clasp).
133 Major General Staunton served with the 10th Regt. in the Sutlej campaign in 1846, in¬
cluding the battle of Sobraon (Medal). Commanded the 31st Regt. in the Crimea from 22nd
May 1855, and was present at the siege of Sebastopol and attacks on the Redan on the 18th
June and 8th Sept.; commanded 2nd Brigade 4th Division as a Brigadier General from 13th
Nov. (Medal and Clasp, Knight of the Legion of Honor, Sardinian and Turkish Medals, and
4lh Class of the Medjidie).
135 Major General W. Hamiltoji commanded a Brigade during the Persian warin 1857, and was
present at the bombardment of Mohumrah (Medal). Commanded the 78th Highlanders in
Havelock's Column from its first taking the field in 1857, including tlie actions at Futtelipore,
Aoung, Pandoo Nuddee, Cawnpore (horse shot) Onao, Buseeriit Gunge on 2S}tli July and 5th
Aug. (horse killed by a round shot), Boorbeakochowkee, and Bithoor j commanded the left
Infantry Brigade in the several actions leading to and ending in the relief of the Residency at
Lucknow and its subsequent defence; served with the force under Outram at Alumbagh, in¬
cluding the repulse of the numerous attacks (frequently mentioned in Dispatclies, CS., Medal
and Clasp, a pension for distinguished service in the field, aiul a year's service for Lucknow).
136 Major General Lloyd served with the Army of the East from May to Oct. 1855 as Com¬
manding Royal Engineer at Constantinople, and from 14th Oct. to the termination of hostilities
as Commanding Royal Engineer with the Army in the Crimea, during which period the total
destruction of the Docks at Sebastopol was effected under his directions. He has the Cr'mean
Medal, the Turkish Medal, and is a Knight of the Legion of Honor.
137 Major General Rochfort Scott s'^rved with the expedition against New Orleans, and was
present at the attack on the American Lines on the 8th Jan. 1815, and at the capture of Fort
Boyer. Served afterwards in France with the Army of Occupation, from July 1815 to Dec. 1818 ;
and with the allied Anglo-Turkish force in Syria, from Dec. 1840 to Nov. 1841 (Medal and Clasp).
138 Lieut.General Macbean served in the Peninsula and France, from July 1812 to August
1814, including the affair at Osma, battle of Vittoria, both sieges of San Sebastian and
capture of it; passage of the Nivelle, 10th November, and actions of the Nive, 9th, 10th,
11th, and 12th December, 1813. Served also the campaign of 1815, including the capture
of Paris. Served afterwards with the Army of Occupation until 1818. He has received the
Silver War Medal with four Clasps.
139 Sir Trevor Chute commanded the forces during the war in New Zealand in 1865-G6
including various important and successful operations (KCB.)
140 Major General English served during the Indian campaign of 1857-59, and while in
command of the Left Wing 53d Regt. 180 strong, with 100 Seikhs, attacked and routed at
Chutra a force of 1000 Mutineers chiefly of the Ilamghur Battalion, taking all their guns, trea¬
sure, and camp equipage—thanked by the Commander in Chief and nominated a CB. Was
thanked by the Governor General for having cleared the Behar District of the mutinous Sepoys
of the 32d N.l. whom he encountered and defeated at Gopalgunge : commanded the 53d Regt.
at the action of Khocagnnge and entry into Futtoh;ihur, and the affair of Stiumshabad j com¬
manded the right column of attack at the storm and capture of Meangunge; commanded the
53d throughout the siege and capture of Lucknow, and the aifair of Koorsie, also at the passage
of tlie Gogra at Fyzabad on 23d Nov. the action of Toolseijore (horse wounded) and minor affairs
(Medal and Clasp).
141 Major General Brown served throughout the Punjaub campaign, and was present
with the 24th at the passage of the Chenab and battles of Sadoolapore and Chillianwallah
(wounded), and as Major of the 29 th Regt. at the battle of Goojerat (Medal and Clasps).
142 Major General Jervis served in the 72nd Highlanders the Kaffir campaigns of 1834-35
(Medal).
143 Major General M. W. Smith was appointed to the Turkish contingent with local rank
of Major General in 1855, and subsequently to the command of the Osmanli Irregular
Cavalry, and obtained the Turkish rank of Lieut. General (2nd Class of the Medjidie).
Commanded a Brigade during the Central India campaign; commanded at the recapture of
Chandairee in May 1858, also at the actions betweenKota ka Serai and Gwalior on 17th June;
commanded a Brigade in the action of the 19th June resulting in the capture of the city and
fortress of Gwalior, also at the siege and capture of Powree ; commanded at the surprise of
the rebel camp at Koondry, also in pursuit of Tantia Topee and the Rao Sahib (Medal and
Clasp and CB., frequently mentioned in despatches).
144 Lieut. General R. B. Burnaby served the campaign of 1815, including the battle of
Waterloo.
145 Lieut. General Hennis served the campaign of 1815, and was present at the battle of
Waterloo.
146 Major General Freese served on the China expedition, and was slightly wounded at
Chinkiangfoo (Medal). Served in the Eastern campaign of 1854-55, including the battle of
Inkerman and siege of Sebastopol, in the" trenches with the siege train and bombardment of
October (Medal and Clasps, CB., 5th Class of the Medjidie, and Turkish Medal).
147 Major General Perceval commanded the reserve Battalion 12th Regt. in the Kaffir
war of 1851-52, and for his services was nominated a CB. (Medal).
148 Major General Stisted served with the Queen's Royals during the campaign in Affghanistan