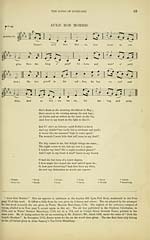 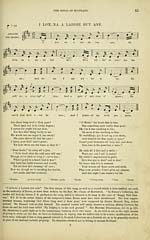 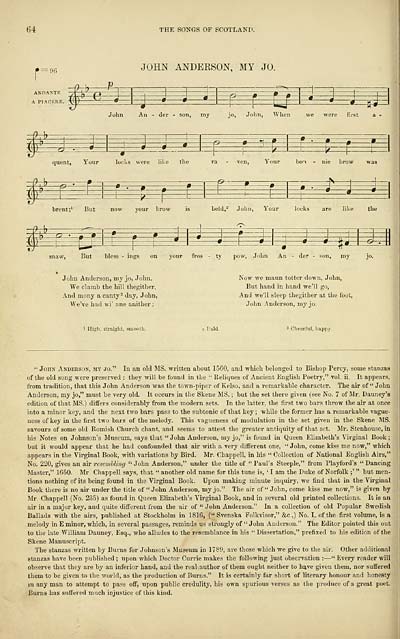 (54
THE SONGS OF SCOTLAND.
: 96
JOHN ANDEESON, MY JO.
A P1ACKRE. TT
5^5
John An - der - son, my jo, John, When we were first a
^g=
fe
3EE
£
>:
quent, Your locks were like the
ven, Your ben - nie brow was
* — 3 •-
m
brent;' But now your brow is beld, 2 John, Your locks are like the
IS
ae
m
4— U-
snaw, But bless - ings on your fros - ty pow, John An - der - son, my jo.
John Anderson, my jo, John,
We clamb the hill thegither.
And mony a canty 3 day, John,
We've had wi' ane anither ;
Now we maun totter down, John,
But hand in hand we'll go,
And we'll sleep thegither at the foot,
John Anderson, my jo.
1 High, straight, smooth.
-. Ilald.
3 Cheerful, happy.
" John Anderson, my jo." In an old MS. written about 1560, and which belonged to Bishop Percy, some stanzas
of the old song were preserved : they will be found in the " Reliques of Ancient English Poetry," vol. ii. It appears,
from tradition, that this John Anderson was the town-piper of Kelso, and a remarkable character. The air of " John
Anderson, my jo," must be very old. It occurs in the Skene MS. ; but the set there given (see No. 7 of Mr. Dauney's
edition of that MS.) differs considerably from the modern sets. In the latter, the first two bars throw the air at once
into a minor key, and the next two bars pass to the subtonic of that key ; while the former has a remarkable vague-
ness of key in the first two bars of the melody. This vagueness of modulation in the set given in the Skene MS.
savours of some old Romish Church chant, and seems to attest the greater antiquity of that set. Mr. Stenhouse, in
his Notes on Johnson's Museum, says that " John Anderson, my jo," is found in Queen Elizabeth's Virginal Book ;
but it would appear that he had confounded that air with a very different one, " John, come kiss me now," which
appears in the Virginal Book, with variations by Bird. Mr. Chappell, in his " Collection of National English Airs,"
No. 220, gives an air resembling " John Anderson," under the title of " Paul's Steeple," from Playford's " Dancing
Master," 1650. Mr. Chappell says, that " another old name for this tune is, ' I am the Duke of Norfolk ;' " but men-
tions nothing of its being found in the Virginal Book. Upon making minute inquiry, we find that in the Virginal
Book there is no air under the title of " John Anderson, my jo." The air of " John, come kiss me now," is given by
Mr. Chappell (No. 235) as found in Queen Elizabeth's Virginal Book, and in several old printed collections. It is an
air in a major key, and quite different from the air of " John Anderson." In a collection of old Popular Swedish
Ballads with the airs, published at Stockholm in 1816, (" Svenska Folkvisor," &c ,) No. I. of the first volume, is a
melody in E minor, which, in several passages, reminds us strongly of " John Anderson." The Editor pointed this out
to the late William Dauney, Esq., who alludes to the resemblance in his " Dissertation," prefixed to his edition of the
Skene Manuscript.
The stanzas written by Burns for Johnson's Museum in 1789, are those which we give to the air. Other additional
6tanzas have been published ; upon which Doctor Currie makes the following just observation : — " Every reader will
observe that they are by an inferior hand, and the real author of them ought neither to have given them, nor suffered
them to be given to the world, as the production of Burns." It is certainly far short of literary honour and honesty
in any man to attempt to pass off, upon public credulity, his own spurious verses as the produce of a great poet.
Eurns has suffered much injustice of this kind.