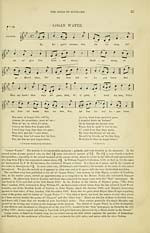 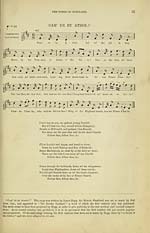 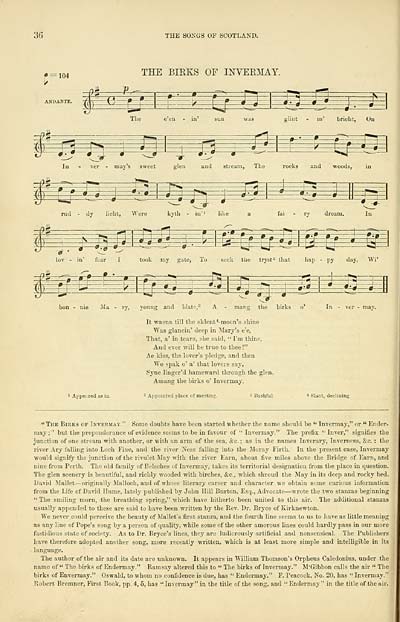 36
THE SONGS OF SCOTLAND.
104
THE BIKKS OF INVEEMAY.
-A
m
^£^S
3^
ifcj:
The
e en - in sun
glint - in' briclit,
On
=gj — ^>— ^ J!! ]- l=q=^ :
i
^^
In
ver - may's sweet glen and stream. The rocks and woods,
^
«>
» o
- ^r~- zr
^
-•— #
if—
in' 1 like
In
rud
dy licht, Were
kyth
fai
ry
dream.
^F=^
g
£T
SSE^
-*-£—»-
S
-I — » — w-m— m — ^J — r-p-
»T1
•v*-#
lov - in' fear
took my gate, To seek the tryst- that bap - py day,
Wi'
-&
fes
=ca
*=i=
'-- ' . «— *■
=P=I
pP2£
*S=
bon
Ma
'7.
young and blate, 3
raang the birks o'
In - ver
It wasna till the sklent 4 -moon's shine
Was glancin' deep in Mary's e'e,
That, a' in tears, she said, " I'm thine,
And ever will be true to thee!"
Ae kiss, the lover's pledge, and then
We spak o' a' that lovers say,
Syne Hnger'd homeward through the glen.
Amang the birks o' Invermay.
1 Appeared as in.
- Appointed place of meeting.
I Bashful.
i Skint, declining
" The Birks of Invebmay." Some doubts have been started whether the name should be " Invermay," or " Ender-
may ; : ' but the preponderance of evidence seems to be in favour of "Invermay." The prefix '• Inver," signifies the
junction of one stream with another, or with an arm of the sea, &c. ; as in the names Inverary, Inverness, &c. : the
river Ary falling into Loch Fine, and the river Ness falling into the Moray Firth. In the present case, Invermay
would signify the junction of the rivulet May with the river Earn, about five miles above the Bridge of Earn, and
nine from Perth. The old family of Belsches of Invermay, takes its territorial designation from the place in question.
The glen scenery is beautiful, and richly wooded with birches, &c, which shroud the May in its deep and rocky bed.
David Mallet — originally Malloch, and of whose literary career and character we obtain some curious information
from the Life of David Hume, lately published by John Hill Burton, Esq., Advocate — wrote the two stanzas beginning
" The smiling morn, the breathing spring," which have hitherto been united to this air. The additional stanzas
usually appended to these are said to have been written by the Rev. Dr. Bryce of Kirknewton.
We never could perceive the beauty of Mallet's first stanza, and the fourth line seems to us to have as little meaning
as any line of Pope's song by a person of quality, while some of the other amorous lines could hardly pass in our more
fastidious state of society. As to Dr. Bryce's lines, they are ludicrously artificial and nonsensical. The Publishers
have therefore adopted another song, more recently written, which is at least more simple and intelligible in its
language.
The author of the air and its date are unknown. It appears in William Thomson's Orpheus Caledonius, under the
name of " The birks of Endermay." Ramsay altered this to " The birks of Invermay." M'Gibbon calls the air " The
birks of Enverrnay." Oswald, to whom no confidence is due, has " Endermay." F. Peacock, No. 20, has " Invermay."
Robert Bremner, First Book, pp. 4, 5, has " Invermay " in the title of the song, and " Endermay " in the title of the air.