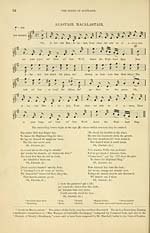 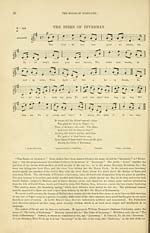 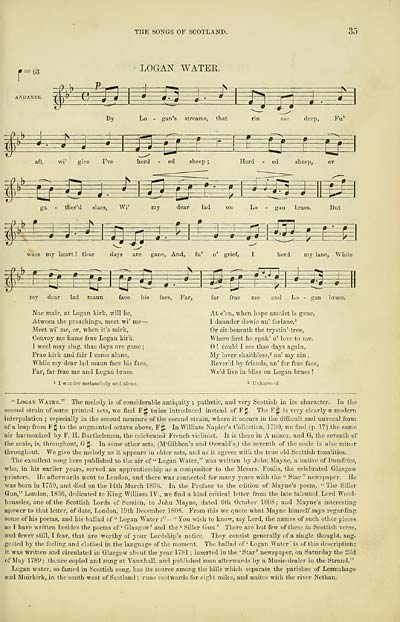 THE SONGS OF SCOTLAND.
35
: 63
LOGAN WATER.
-£
-■ ge^
— (■"■■■ 1 S— r
^
By
Lo - gan's streams, that
sae deep,
Fu'
^^E
i 1
ZjUf-
3=
- &
aft
j£z+
=£2
glee
I've
herd
ed sheep ;
Herd
ed
sheep,
e*
£
S5£
g£=^3=*
±
ga - ther'd slaes, Wi'
my dear lad on Lo - gan braes.
But
±=£
Wm^\
m
m
— s 4 0-
waes my heart ! thae days are gane, And, fu' o' grief, I herd my lane, While
P
j — »-
S===PP
£
3
W-
t£E
my dear lad maun face his faes, Far,
Nae mair, at Logan kirk, will he,
Atween the preachings, meet wi' me —
Meet wi' me, or, when it's mirk,
Convoy me hame frae Logan kirk.
I weel may sing, thae days are gane ;
Frae kirk and fair I come alane,
While my dear lad maun face his faes,
Far, far frae me and Logan braes.
1 I wnnder melancholy and alone.
far frae me and Lo - gan braes.
At e'en, when hope amaist is gane,
I daunder dowie an' forlane, 1
Or sit beneath the trystin'-tree,
Where first ho spak' o' love to me.
! could I see thae days again,
My lover skaithless, 2 an' my ain ;
Rever'd by friends, an' far frae faes,
We'd live in bliss on Logan braes !
" Logan Water." The melody is of considerable antiquity ; pathetic, and very Scottish in its character. In the
second strain of some printed sets, we find Fjt twice introduced instead of Ft. The F;tt is very clearly a modern
interpolation ; especially in the second measure of the second strain, where it occurs in the difficult and unvocal form
of a leap from F b to the augmented octave above, Fj. In William Napier's Collection, 1790, we find (p. 17) the same
air harmonized by F. H. Barthelemon, the celebrated French violinist. It is there in A minor, and G, the seventh of
the scale, is, throughout, G H. In some other sets, (M'Gibbon's and Oswald's,) the seventh of the scale is also minor
throughout. We give the melody as it appears in older sets, and as it agrees with the true old Scottish tonalities.
The excellent song here published to the air of" Logan Water," was written by John Mayne, a native of Dumfries,
who, in his earlier years, served an apprenticeship as a compositor to the Messrs. Foulis, the celebrated Glasgow
printers. He afterwards went to London, and there was connected for many years with the " Star" newspaper. He
was born in 1759, and died on the 14th March 1836. In the Preface to the edition of Mayne's poem, "The Siller
Gun," London, 1836, dedicated to King William IV., we find a kind critical letter from the late talented Lord Wood-
houselee, one of the Scottish Lords of Session, to John Mayne, dated 6th October 180S ; and Mayne's interesting
answer to that letter, of date, London, 19th December 1808. From this we quote what Mayne himself says regarding
some of his poems, and his ballad of " Logan Water :" — " You wish to know, my Lord, the names of such other pieces
as I have written besides the poems of ' Glasgow ' and the ' Siller Gun.' There are but few of these in Scottish verse,
and fewer still, I fear, that are worthy of your Lordship's notice. They consist generally of a single thought, sug-
gested by the feeling and clothed in the language of the moment. The ballad of ' Logan Water ' is of this description :
it was written and circulated in Glasgow about the year 1781 ; inserted in the ' Star' newspaper, on Saturday the 23d
of May 1789; thence copied and sung at Vauxhall, and published soon afterwards by a Music-dealer in the Strand."
Logan water, so famed in Scottish song, has its source among the hills which separate the parishes of Lesmahago
and Muirkirk, in the south-west of Scotland ; runs eastwards for eight miles, and unites with the river Ncthan.