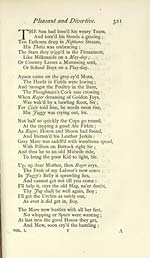 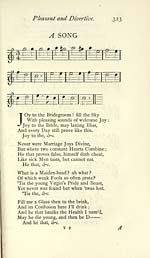 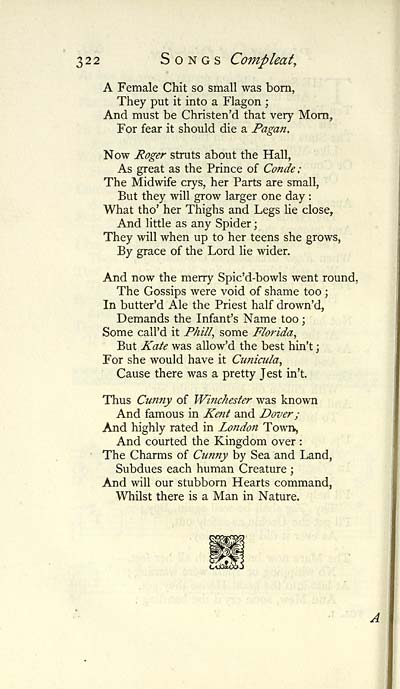 322 Songs Compleat,
A Female Chit so small was born,
They put it into a Flagon ;
And must be Christen'd that very Morn,
For fear it should die a Pagan.
Now Roger struts about the Hall,
As great as the Prince of Conde ;
The Midwife crys, her Parts are small,
But they will grow larger one day :
What tho' her Thighs and Legs lie close,
And little as any Spider ;
They will when up to her teens she grows,
By grace of the Lord lie wider.
And now the merry Spic'd-bowls went round,
The Gossips were void of shame too ;
In butter'd Ale the Priest half drown'd,
Demands the Infant's Name too ;
Some call'd it Phill, some Florida,
But Kate was allow'd the best hin't ;
For she would have it Cunicu/a,
Cause there was a pretty Jest in't.
Thus Cunny of Winchester was known
And famous in Kent and Dover;
And highly rated in London Town,
And courted the Kingdom over :
The Charms of Cunny by Sea and Land,
Subdues each human Creature ;
And will our stubborn Hearts command,
Whilst there is a Man in Nature.