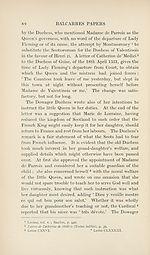 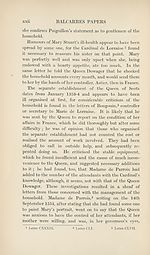 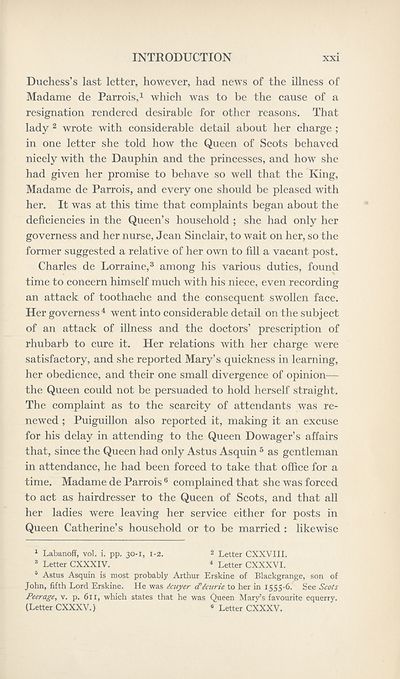 INTRODUCTION
xxi
Duchess’s last letter, however, had news of the illness of
Madame de Parrois,1 which was to be the cause of a
resignation rendered desirable for other reasons. That
lady 2 wrote with considerable detail about her charge ;
in one letter she told how the Queen of Scots behaved
nicely with the Dauphin and the princesses, and how she
had given her promise to behave so well that the King,
Madame de Parrois, and every one should be pleased with
her. It was at this time that complaints began about the
deficiencies in the Queen’s household ; she had only her
governess and her nurse, Jean Sinclair, to wait on her, so the
former suggested a relative of her own to fill a vacant post.
Charles de Lorraine,3 among his various duties, found
time to concern himself much with his niece, even recording
an attack of toothache and the consequent swollen face.
Her governess 4 went into considerable detail on the subject
of an attack of illness and the doctors’ prescription of
rhubarb to cure it. Her relations with her charge were
satisfactory, and she reported Mary’s quickness in learning,
her obedience, and their one small divergence of opinion—
the Queen could not be persuaded to hold herself straight.
The complaint as to the scarcity of attendants was re¬
newed ; Puiguillon also reported it, making it an excuse
for his delay in attending to the Queen Dowager’s affairs
that, since the Queen had only Astus Asquin 5 as gentleman
in attendance, he had been forced to take that office for a
time. Madame de Parrois 6 complained that she was forced
to act as hairdresser to the Queen of Scots, and that all
her ladies were leaving her service either for posts in
Queen Catherine’s household or to be married : likewise
1 Labanoff, vol. i. pp. 30-1, 1-2. 2 Letter CXXVIII.
3 Letter CXXXIV. 1 Letter CXXXVI.
6 Astus Asquin is most probably Arthur Erskine of Blackgrange, son of
John, fifth Lord Erskine. He was icuyer cCicurie to her in 1555-6. See Scots
Peerage, v. p. 611, which states that he was Queen Mary’s favourite equerry.
(Letter CXXXV.) « Letter CXXXV.