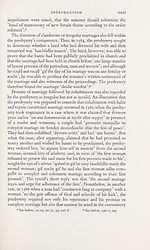 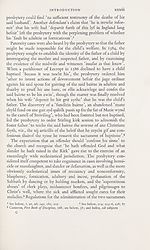 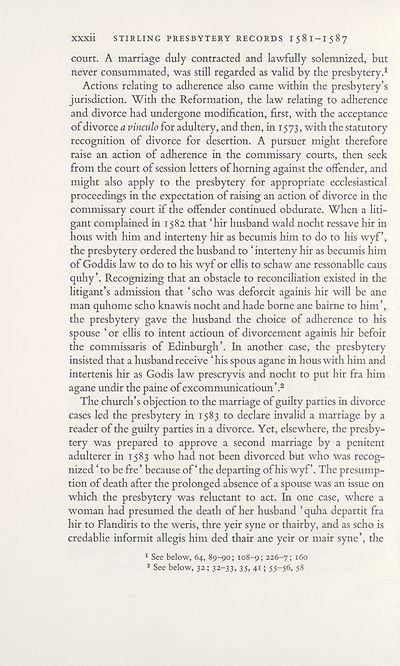 XXxii STIRLING PRESBYTERY RECORDS I58I-I587
court. A marriage duly contracted and lawfully solemnized, but
never consummated, was still regarded as valid by the presbytery.1
Actions relating to adherence also came within the presbytery’s
jurisdiction. With the Reformation, the law relating to adherence
and divorce had undergone modification, first, with the acceptance
of divorce a vinculo for adultery, and then, in 1573, with the statutory
recognition of divorce for desertion. A pursuer might therefore
raise an action of adherence in the commissary courts, then seek
from the court of session letters of horning against the offender, and
might also apply to the presbytery for appropriate ecclesiastical
proceedings in the expectation of raising an action of divorce in the
commissary court if the offender continued obdurate. When a liti¬
gant complained in 1582 that ‘hir husband wald nocht ressave hir in
hous with him and interteny hir as becumis him to do to his wyf’,
the presbytery ordered the husband to ‘ interteny hir as becumis him
of Goddis law to do to his wyf or ellis to schaw ane ressonablle caus
quhy’. Recognizing that an obstacle to reconciliation existed in the
litigant’s admission that ‘scho was deforcit againis hir will be ane
man quhome scho knawis nocht and hade borne ane baime to him’,
the presbytery gave the husband the choice of adherence to his
spouse ‘or ellis to intent actioun of divorcement againis hir befoir
the commissaris of Edinburgh’. In another case, the presbytery
insisted that a husband receive ‘his spous agane in hous with him and
intertenis hir as Godis law prescryvis and nocht to put hir fra him
agane undir the paine of excommunicatioun’.2
The church’s objection to the marriage of guilty parties in divorce
cases led the presbytery in 1583 to declare invalid a marriage by a
reader of the guilty parties in a divorce. Yet, elsewhere, the presby¬
tery was prepared to approve a second marriage by a penitent
adulterer in 1583 who had not been divorced but who was recog¬
nized ‘ to be fre’ because of ‘ the departing of his wyf’. The presump¬
tion of death after the prolonged absence of a spouse was an issue on
which the presbytery was reluctant to act. In one case, where a
woman had presumed the death of her husband ‘ quha departit fra
hir to Flandiris to the weris, thre yeir syne or thairby, and as scho is
credablie informit allegis him ded thair ane yeir or mair syne’, the
1 See below, 64, 89-90; 108-9; 226-7; i<5o
2 See below, 32; 32-33, 35, 41; 55-56, 58