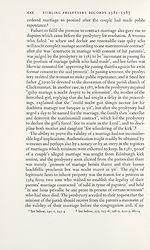 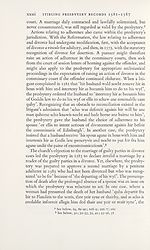 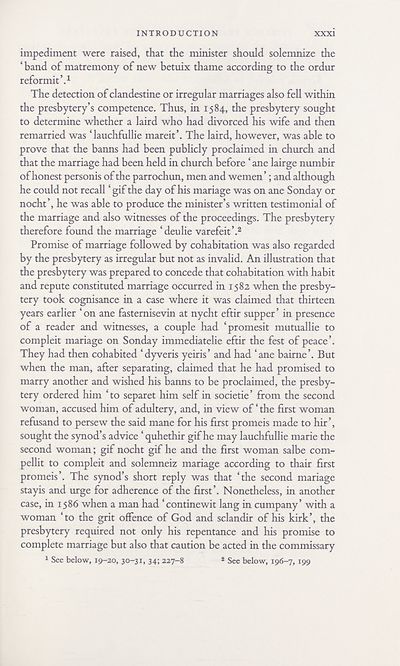 INTRODUCTION
xxxi
impediment were raised, that the minister should solemnize the
‘ band of matremony of new betuix thame according to the ordur
reformit’.1
The detection of clandestine or irregular marriages also fell within
the presbytery’s competence. Thus, in 1584, the presbytery sought
to determine whether a laird who had divorced his wife and then
remarried was ‘ lauchfullie mareit’. The laird, however, was able to
prove that the banns had been publicly proclaimed in church and
that the marriage had been held in church before ‘ ane lairge numbir
of honest personis of the parrochun, men and wemen’; and although
he could not recall ‘ gif the day of his mariage was on ane Sonday or
nocht’, he was able to produce the minister’s written testimonial of
the marriage and also witnesses of the proceedings. The presbytery
therefore found the marriage ‘deulie varefeit’.2
Promise of marriage followed by cohabitation was also regarded
by the presbytery as irregular but not as invalid. An illustration that
the presbytery was prepared to concede that cohabitation with habit
and repute constituted marriage occurred in 1582 when the presby¬
tery took cognisance in a case where it was claimed that thirteen
years earlier ‘on ane fastemisevin at nycht eftir supper’ in presence
of a reader and witnesses, a couple had ‘promesit mutuallie to
compleit mariage on Sonday immediatelie eftir the fest of peace’.
They had then cohabited ‘dyveris yeiris’ and had ‘ane baime’. But
when the man, after separating, claimed that he had promised to
marry another and wished his banns to be proclaimed, the presby¬
tery ordered him ‘to separet him self in societie’ from the second
woman, accused him of adultery, and, in view of‘the first woman
refusand to persew the said mane for his first promeis made to hir’,
sought the synod’s advice ‘quhethir gif he may lauchfullie marie the
second woman; gif nocht gif he and the first woman salbe com-
pellit to compleit and solemneiz mariage according to thair first
promeis’. The synod’s short reply was that ‘the second mariage
stayis and urge for adherence of the first’. Nonetheless, in another
case, in 1586 when a man had ‘continewit lang in cumpany’ with a
woman ‘to the grit offence of God and sclandir of his kirk’, the
presbytery required not only his repentance and his promise to
complete marriage but also that caution be acted in the commissary
1 See below, 19-20, 30-31, 34; 227-8 2 See below, 196-7, 199