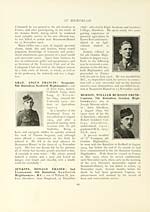 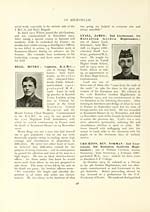 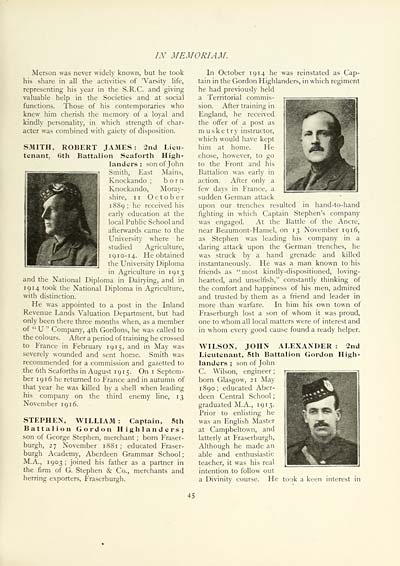 IX MEMORIAM.
Merson was never widely known, but he took
his share in all the activities of 'Varsity life,
representing his year in the S.R.C. and giving
valuable help in the Societies and at social
functions. Those of his contemporaries who
knew him cherish the memory of a loyal and
kindly personality, in which strength of char-
acter was combined with gaiety of disposition.
SMITH, ROBERT JAMES : 2nd Lieu-
tenant, 6th Battalion Seaforth High-
landers ; son of John
Smith, East Mains,
Knockando ; born
Knockando, Moray-
shire, ii October
1889; he received his
early education at the
local Public School and
afterwards came to the
University where he
studied Agriculture,
1 9 1 o- 1 4. He obtained
the University Diploma
in Agriculture in 19 13
and the National Diploma in Dairying, and in
1914 took the National Diploma in Agriculture,
with distinction.
He was appointed to a post in the Inland
Revenue Lands Valuation Department, but had
only been there three months when, as a member
of " U " Company, 4th Gordons, he was called to
the colours. After a period of training he crossed
to France in February 191 5, and in May was
severely wounded and sent home. Smith was
recommended for a commission and gazetted to
the 6th Seaforths in August 1915. On 1 Septem-
ber 1916 he returned to France and in autumn of
that year he was killed by a shell when leading
his company on the third enemy line, 13
November 1916.
STEPHEN, WILLIAM : Captain, 5th
Battalion Gordon Highlanders;
son of George Stephen, merchant ; born Fraser-
burgh, 27 November 1881 ; educated Fraser-
burgh Academy, Aberdeen Grammar School ;
M.A., 1903; joined his father as a partner in
the firm of G. Stephen & Co., merchants and
herring exporters, Fraserburgh.
In October 19 14 he was reinstated as Cap-
tain in the Gordon Highlanders, in which regiment
he had previously held
a Territorial commis-
sion. After training in
England, he received
the offer of a post as
musketry instructor,
which would have kept
him at home. He
chose, however, to go
to the Front and his
Battalion was early in
action. After only a
few days in France, a
sudden German attack
upon our trenches resulted in hand-to-hand
fighting in which Captain Stephen's company
was engaged. At the Battle of the Ancre,
near Beaumont-Hamel, on 13 November 1916,
as Stephen was leading his company in a
daring attack upon the German trenches, he
was struck by a hand grenade and killed
instantaneously. He was a man known to his
friends as " most kindly-dispositioned, loving-
hearted, and unselfish," constantly thinking of
the comfort and happiness of his men, admired
and trusted by them as a friend and leader in
more than warfare. In him his own town of
Fraserburgh lost a son of whom it was proud,
one to whom all local matters were of interest and
in whom every good cause found a ready helper.
WILSON, JOHN ALEXANDER : 2nd
Lieutenant, 5th Battalion Gordon High-
landers ; son of John
C. Wilson, engineer ;
born Glasgow, 21 May
1890; educated Aber-
deen Central School ;
graduated M.A., 19 13.
Prior to enlisting he
was an English Master
at Campbeltown, and
latterly at Fraserburgh,
Although he made an
able and enthusiastic
teacher, it was his real
intention to follow out
a Divinity course. He took a keen interest in
45