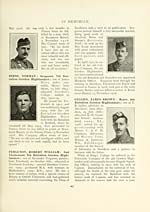 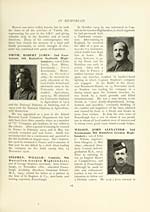 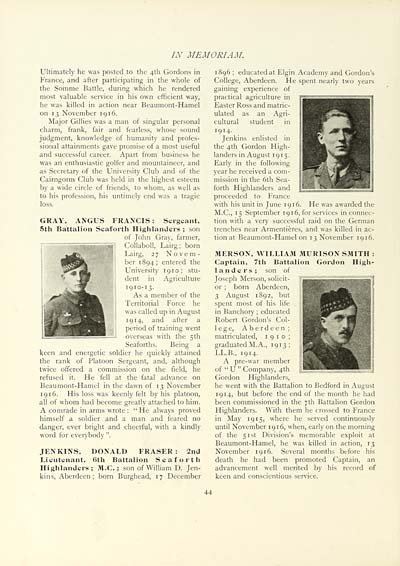 IN MEMORIAM.
Ultimately he was posted to the 4th Gordons in
France, and after participating in the whole of
the Sotnme Battle, during which he rendered
most valuable service in his own efficient way,
he was killed in action near Beaumont-Hamel
on 13 November 1916.
Major Gillies was a man of singular personal
charm, frank, fair and fearless, whose sound
judgment, knowledge of humanity and profes-
sional attainments gave promise of a most useful
and successful career. Apart from business he
was an enthusiastic golfer and mountaineer, and
as Secretary of the University Club and of the
Cairngorm Club was held in the highest esteem
by a wide circle of friends, to whom, as well as
to his profession, his untimely end was a tragic
loss.
GRAY, ANGUS FRANCIS: Sergeant,
5th Battalion Seaforth Highlanders ; son
of John Gray, farmer,
Collaboll, Lairg ; born
Lairg, 27 Novem-
ber 1894; entered the
University 1910; stu-
dent in Agriculture
1910-13.
As a member of the
Territorial Force he
was called up in August
1 9 14, and after a
period of training went
overseas with the 5th
Seaforths. Being a
keen and energetic soldier he quickly attained
the rank of Platoon Sergeant, and, although
twice offered a commission on the field, he
refused it. He fell at the fatal advance on
Beaumont-Hamel in the dawn of 13 November
19 1 6. His loss was keenly felt by his platoon,
all of whom had become greatly attached to him.
A comrade in arms wrote : "He always proved
himself a soldier and a man and feared no
danger, ever bright and cheerful, with a kindly
word for everybody ".
JENKINS, DONALD FRASER : 2nd
Lieutenant, 6th Battalion Seaforth
Highlanders; M.C. ; son of William D. Jen-
kins, Aberdeen; born Burghead, 17 December
He was awarded the
1896 ; educated at Elgin Academy and Gordon's
College, Aberdeen. He spent nearly two years
gaining experience of
practical agriculture in
Easter Ross and matric-
ulated as an Agri-
cultural student in
1914.
Jenkins enlisted in
the 4th Gordon High-
landers in August 19 1 5.
Early in the following
year he received a com-
mission in the 6th Sea- i
forth Highlanders and
proceeded to France
with his unit in June 191 6.
M.C, 15 September 1916, for services in connec-
tion with a very successful raid on the German
trenches near Armentieres, and was killed in ac-
tion at Beaumont-Hamel on 13 November 1916.
MERSON, WILLIAM MURISON SMITH :
Captain, 7th Battalion Gordon High-
landers ; son of
Joseph Merson, solicit-
or ; born Aberdeen,
3 August 1892, but
spent most of his life
in Banchory ; educated
Robert Gordon's Col-
lege, Aberdeen;
matriculated, 1 9 1 o ;
graduated M. A., 1913;
LL.B., 1914.
A pre-war member
of " U " Company, 4th
Gordon Highlanders,
he went with the Battalion to Bedford in August
1 9 14, but before the end of the month he had
been commissioned in the 7th Battalion Gordon
Highlanders. With them he crossed to France
in May 1915, where he served continuously
until November 1916, when, early on the morning
of the 51st Division's memorable exploit at
Beaumont-Hamel, he was killed in action, 13
November 1916. Several months before his
death he had been promoted Captain, an
advancement well merited by his record of
keen and conscientious service.
44