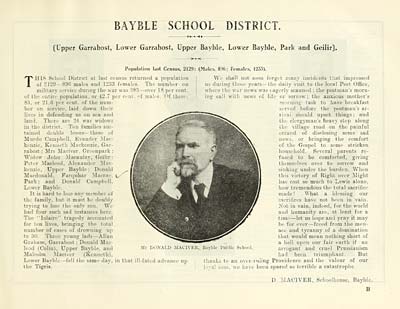 BAYBLE SCHOOL DISTRICT,
[Upper Garrabost, Lower Garrabost, Upper Bayble, Lower Bayble, Park and Geilir).
Population last Census, 2129: (Males, 896; Females, 1233).
THIS School District at last census returned a population
of 2129—896 males and 1233 females. The number on
military service during the war was 383 — over 18 per cent,
of the entire population, or 42.7 per cent, of males. Of these,
83, or 21.6 per cent, of the num-
ber on service, laid down their
lives in defending us on sea and
land. There are 24 war widows
in the district. Ten families sus-
tained double losses — those of
Murdo Campbell, Evander Mac-
kenzie, Kenneth Mackenzie, Gar-
rabost ; Mrs Maciver, Greenpark ;
Widow John Macaulay, Geilir :
Peter Macleod, Alexander Mac-
kenzie, Upper Bayble ; Donald
Macdonald, Farquhar Macrae,
Park: and Donald Campbell,
Lower Bayble.
It is hard to lose any member of
the family, but it must be doubly
trying to lose the only son. We
had four such sad instances here.
The "Iolaire" tragedy accounted
for ten lives, bringing the total
number of cases of drowning up
to 30. Three young lads — Allan
Graham, Garrabost ; Donald Mac-
leod (Colin), Upper Bayble, and
Malcolm Maciver (Kenneth).
Lower Bayble — fell the same day, in that ill-fated advance up
the Tigris.
Mr DONAtD MACIVER, Bayble Public School.
We shall not soon forget many incidents that impressed
us during those years — the daily visit to the local Post Office,
where the war news was eagerly scanned : the postman's morn-
ing call with, news of life or sorrow; the anxious mother's
morning task to have breakfast
served before the postman's ar-
rival should upset things ; and
the clergyman's heavy step along
the village road on the painful
errand of disclosing some sad
news, or bringing the comfort
of the Gospel to some stricken
household. Several parents re-
fused to be comforted, giving
themselves over to sorrow and
sinking under the burden. When
this victory of Right over Might
has cost so much to Lewis alone,
how tremendous the total sacrifice
made ! What a blessing our
sacrifices have not been in vain.
Not in vain, indeed, for the world
and humanity are, at least for a
time — let us hope and pray it may
be for ever — freed from the men-
ace and tyranny of a domination
that would mean nothing short of
a, hell upon our fair earth if an
arrogant and cruel Prussianism
had been triumphant. But
thanks to an over-ruling Providence and the valour of our
loval sons, we have been spared so terrible a catastrophe.
I) MACIVER, Schoolhouse, Bayble.
B