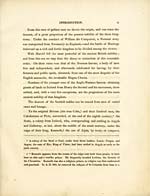 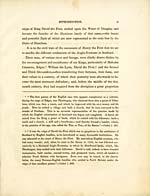 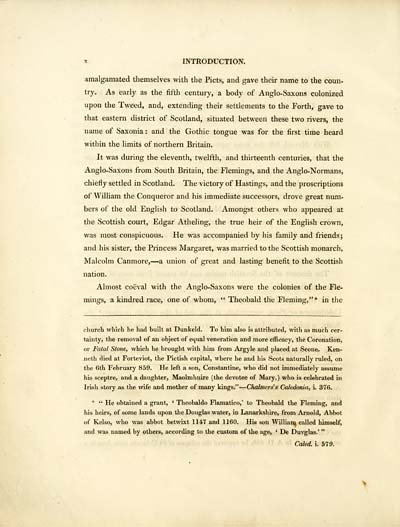 x INTRODUCTION.
amalgamated themselves with the Picts, and gave their name to the coun-
try. As early as the fifth century, a body of Anglo-Saxons colonized
upon the Tweed, and, extending their settlements to the Forth, gave to
that eastern district of Scotland, situated between these two rivers, the
name of Saxonia : and the Gothic tongue was for the first time heard
within the limits of northern Britain.
It was during the eleventh, twelfth, and thirteenth centuries, that the
Anglo-Saxons from South Britain, the Flemings, and the Anglo-Normans,
chiefly settled in Scotland. The victory of Hastings, and the proscriptions
of William the Conqueror and his immediate successors, drove great num-
bers of the old English to Scotland. Amongst others who appeared at
the Scottish court, Edgar Atheling, the true heir of the English crown,
was most conspicuous. He was accompanied by his family and friends;
and his sister, the Princess Margaret, was married to the Scottish monarch,
Malcolm Canmore, — a union of great and lasting benefit to the Scottish
nation.
Almost coeval with the Anglo-Saxons were the colonies of the Fle-
mings, a kindred race, one of whom, " Theobald the Fleming,"* in the
church which he had built at Dunkeld. To him also is attributed, with as much cer-
tainty, the removal of an object of equal veneration and more efficacy, the Coronation,
or Fatal Stone, which he brought with him from Argyle and placed at Scone. Ken-
neth died at Forteviot, the Pictish capital, where he and his Scots naturally ruled, on
the 6th February 859. He left a son, Constantine, who did not immediately assume
his sceptre, and a daughter, Maolmhuire (the devotee of Mary,) who is celebrated in
Irish story as the wife and mother of many kings." — Chalmers's Caledonia, i. 376.
* " He obtained a grant, ' Theobaldo Flamatico, 1 to Theobald the Fleming, and
his heirs, of some lands upon the Douglas water, in Lanarkshire, from Arnold, Abbot
of Kelso, who was abbot betwixt 1147 and 1160. His son William called himself,
and was named by others, according to the custom of the age, ' De Duvglas.' "
Caled. i. 579.