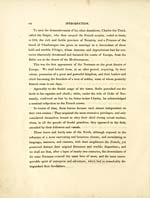 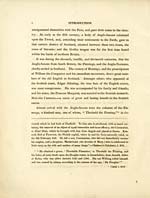 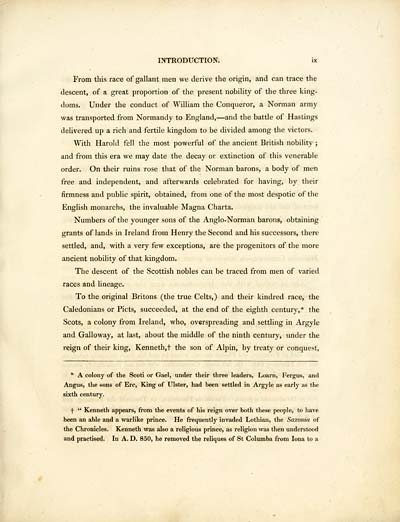 INTRODUCTION. ix
From this race of gallant men we derive the origin, and can trace the
descent, of a great proportion of the present nobility of the three king-
doms. Under the conduct of William the Conqueror, a Norman army
was transported from Normandy to England, — and the battle of Hastings
delivered up a rich and fertile kingdom to be divided among the victors.
With Harold fell the most powerful of the ancient British nobility ;
and from this era we may date the decay or extinction of this venerable
order. On their ruins rose that of the Norman barons, a body of men
free and independent, and afterwards celebrated for having, by their
firmness and public spirit, obtained, from one of the most despotic of the
English monarchs, the invaluable Magna Charta.
Numbers of the younger sons of the Anglo-Norman barons, obtaining
grants of lands in Ireland from Henry the Second and his successors, there
settled, and, with a very few exceptions, are the progenitors of the more
ancient nobility of that kingdom.
The descent of the Scottish nobles can be traced from men of varied
races and lineage.
To the original Britons (the true Celts,) and their kindred race, the
Caledonians or Picts, succeeded, at the end of the eighth century,* the
Scots, a colony from Ireland, who, overspreading and settling in Argyle
and Galloway, at last, about the middle of the ninth century, under the
reign of their king, Kenneth,t the son of Alpin, by treaty or conquest,
* A colony of the Scoti or Gael, under their three leaders, Loarn, Fergus, and
Angus, the sons of Ere, King of Ulster, had been settled in Argyle as early as the
sixth century.
f " Kenneth appears, from the events of his reign over both these people, to have
been an able and a warlike prince. He frequently invaded Lothian, the Saxonia of
the Chronicles. Kenneth was also a religious prince, as religion was then understood
and practised. In A. D. 850, he removed the reliques of St Columba from Iona to a