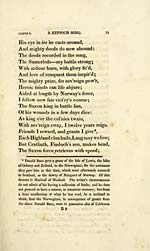 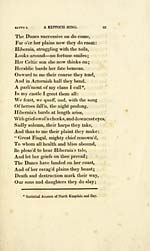 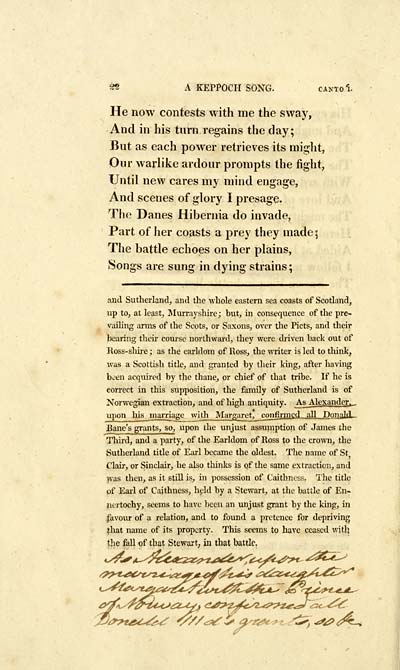 &B A KEPPOCH SONG. canto 1.
He now contests with me the sway,
And in his turn. regains the day;
But as each power retrieves its might,
Our warlike ardour prompts the fight,
Until new cares my mind engage,
And scenes of glory I presage.
The Danes Hibernia do invade,
Part of her coasts a prey they made 5
The battle echoes on her plains,
Songs are sung in dying strains;
and Sutherland, and the whole eastern sea coasts of Scotland,
up to, at least, Murray shire; but, in consequence of the pre-
vailing arms of the Scots, or Saxons, over the Picts, and their
hearing their course northward, they were driven hack out of
Ross-sliire ; as the earldom of Ross, the writer is led to think,
was a Scottish title, and granted by their king, after having
been acquired by the thane, or chief of that tribe. If he is
correct in this supposition, the family of Sutherland is of
Norwegian extraction, and of high antiquity. As Alexander^.
upon his marriag e with Margaret, confirmed all D onaliL.
Bane's grants, so, upon the unjust assumption of James the
Third, and a party, of the Earldom of Ross to the crown, the
Sutherland title of Earl became the oldest. The name of St,
Clair, or Sinclair, he also thinks is of the same extraction, and
was then, as it still is, in possession of Caithness. The title
pf Earl of Caithness, held by a Stewart, at the battle of En-
ncrtochy, seems to have been an unjust grant by the king, in
favour of a relation, and to found a pretence for depriving
that name of its property. This seems to have ceased with.
the fall of that Stewart, in that battle,
'/'