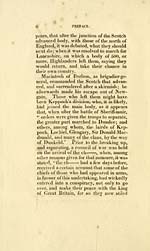 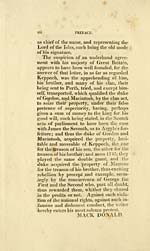 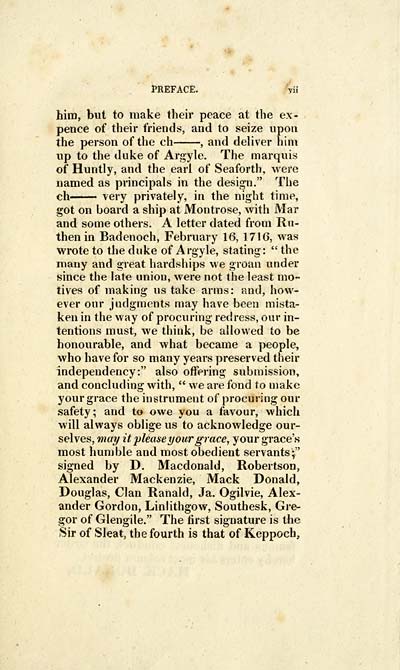 PREFACE. yii
him, but to make their peace at the ex-
pence of their friends, and to seize upon
the person of the ch , and deliver him
up to the duke of Argyle. The marquis
of Huntly, and the earl of Seaforth, were
named as principals in the design." The
ch very privately, in the night time,
got on board a ship at Montrose, with Mar
and some others. A letter dated from Ru-
thenin Badenoch, February 16, 1716, was
wrote to the duke of Argyle, stating: " the
many and great hardships we groan under
since the late union, were not the least mo-
tives of making us take arms: and, how-
ever our judgments may have been mista-
ken in the way of procuring redress, our in-
tentions must, we think, be allowed to be
honourable, and what became a people,
who have for so many years preserved their
independency:" also offering submission,
and concluding with, " we are fond to make
your grace the instrument of procuring our
safety; and to owe you a favour, which
will always oblige us to acknowledge our-
selves, may it please your grace, your grace's
most humble and most obedient servants;"
signed by D. Macdonald, Robertson,
Alexander Mackenzie, Mack Donald,
Douglas, Clan Ranald, Ja. Ogilvie, Alex-
ander Gordon, Linlithgow, Southesk, Gre-
gor of Glengile." The first signature is the
Sir of Sleat, the fourth is that of Keppoch,