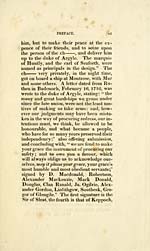 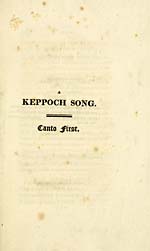 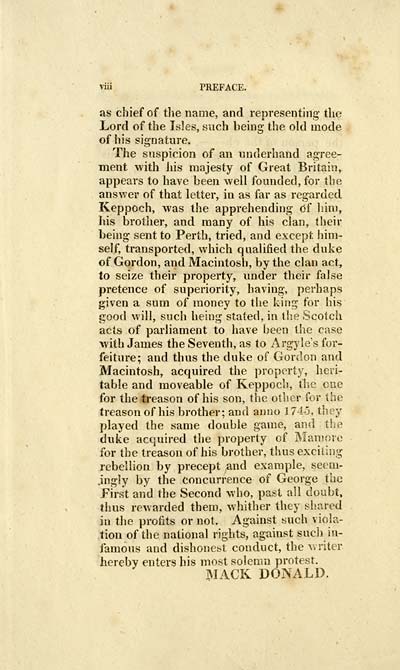 viii PREFACE.
as chief of the name, and representing the
Lord of the Isles, such being the old mode
of his signature.
The suspicion of an underhand agree-
ment with iiis majesty of Great Britain,
appears to have been well founded, for the
answer of that letter, in as far as regarded
Keppoch, was the apprehending of him,
his brother, and many of his clan, their
being sent to Perth, tried, and except him-
self, transported, which qualified the duke
of Gordon, and Macintosh, by the clan act,
to seize their property, under their false
pretence of superiority, having, perhaps
given a sum of money to the king for his
good will, such being stated, in the Scotch
acts of parliament to have been the case
with James the Seventh, as to Argyle's for-
feiture; and thus the duke of Gordon and
Macintosh, acquired the property, heri-
table and moveable of Keppoch, the one
for the treason of his son, the other for the
treason of his brother; and anno 1 745, they
played the same double game, and the
duke acquired the property of Mamorc
for the treason of his brother, thus exciting
rebellion by precept and example, seem-
ingly by the concurrence of George the
First and the Second who, past all doubt,
thus rewarded them, whither they shared
in the profits or not. Against such viola-
tion of the national rights, against such in-
famous and dishonest conduct, the writer
hereby enters his most solemn protest.
MACK DONALD.