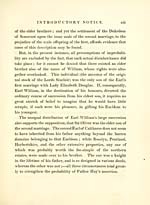 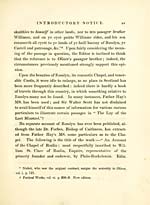 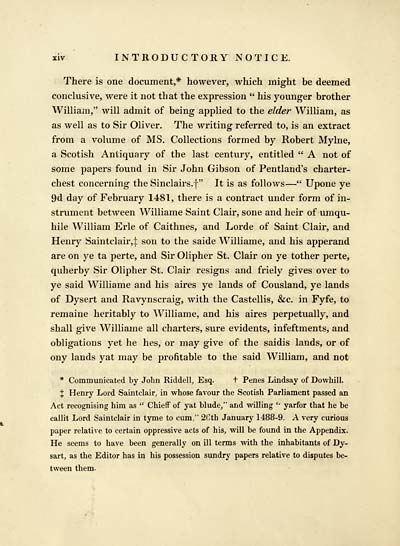 xiv INTRODUCTORY NOTICE.
There is one document,* however, which might be deemed
conclusive, were it not that the expression " his younger brother
William," will admit of being applied to the elder William, as
as well as to Sir Oliver. The writing referred to, is an extract
from a volume of MS. Collections formed by Robert Mylne,
a Scotish Antiquary of the last century, entitled " A not of
some papers found in Sir John Gibson of Pentland's charter-
chest concerning the Sinclairs.f" It is as follows — " Upone ye
9d day of February 1481, there is a contract under form of in-
strument between Williame Saint Clair, sone and heir of umqu-
hile William Erie of Caithnes, and Lorde of Saint Clair, and
Henry Saintclair,i son to the saide Williame, and his apperand
are on ye ta perte, and Sir Olipher St. Clair on ye tother perte,
quherby Sir Olipher St. Clair resigns and friely gives over to
ye said Williame and his aires ye lands of Cousland, ye lands
of Dysert and Ravynscraig, with the Castellis, &c. in Fyfe, to
remaine heritably to Williame, and his aires perpetually, and
shall give Williame all charters, sure evidents, infeftments, and
obligations yet he lies, or may give of the saidis lands, or of
ony lands yat may be profitable to the said William, and not
* Communicated by John Riddell, Esq. t Penes Lindsay of Dowhill.
% Henry Lord Saintclair, in whose favour the Scotish Parliament passed an
Act recognising him as " Chieff of yat blude," and willing '• yarfor that he be
callit Lord Saintclair in tyme to cum," 2(,"th January 1488-9. A very curious
paper relative to certain oppressive acts of his, will be found in the Appendix.
He seems to have been generally on ill terms with the inhabitants of Dy-
sart, as the Editor has in his possession sundry papers relative to disputes be-
tween them.