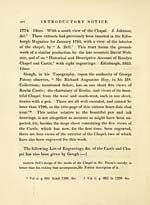 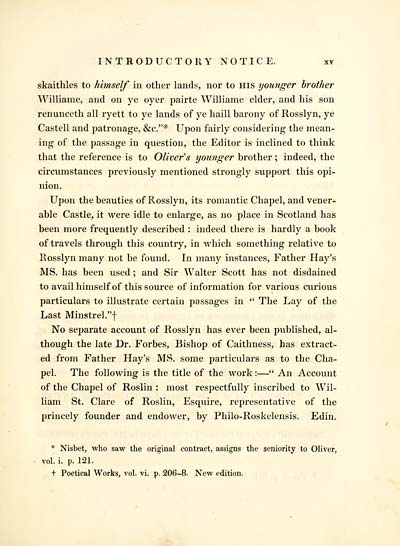 INTRODUCTORY NOTICE. xv
skaithles to himself in other lands, nor to His younger brother
Williame, and on ye oyer pairte Williame elder, and his son
renunceth all ryett to ye lands of ye haill barony of Rosslyn, ye
Castell and patronage, &c."* Upon fairly considering the mean-
ing of the passage in question, the Editor is inclined to think
that the reference is to Oliver's younger brother ; indeed, the
circumstances previously mentioned strongly support this opi-
nion.
Upon the beauties of Rosslyn, its romantic Chapel, and vener-
able Castle, it were idle to enlarge, as no place in Scotland has
been more frequently described : indeed there is hardly a book
of travels through this country, in which something relative to
Rosslyn many not be found. In many instances, Father Hay's
MS. has been used ; and Sir Walter Scott has not disdained
to avail himself of this source of information for various curious
particulars to illustrate certain passages in " The Lay of the
Last Minstrel."!
No separate account of Rosslyn has ever been published, al-
though the late Dr. Forbes, Bishop of Caithness, has extract-
ed from Father Hay's MS. some particulars as to the Cha-
pel. The following is the title of the work : — " An Account
of the Chapel of Roslin : most respectfully inscribed to Wil-
liam St. Clare of Roslin, Esquire, representative of the
princely founder and endower, by Philo-Roskelensis. Edin.
* Nisbet, who saw the original contract, assigns the seniority to Oliver,
vol. i. p. 121.
+ Poetical Works, vol. vi. p. 206-8. New edition.