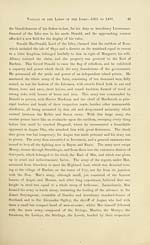 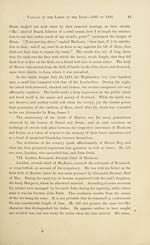 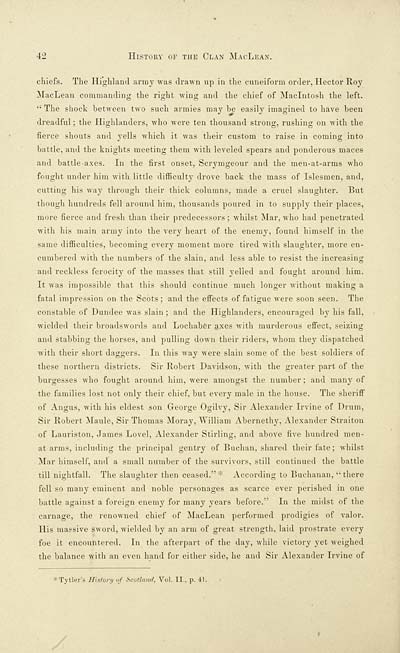 42 History of the Clan MacLban.
chiefs. The Highhind array was drawn up in the cuneiform order, Hector Roy
MacLean commanding the right wing and the chief of Macintosh the left.
" The shock between two such armies may be easily imagined to have been
dreadful ; the Highlanders, who were ten thousand strong, rushing on with the
fierce shouts and yells which it was their custom to raise in coming into
battle, and the knights meeting them with leveled spears and ponderous maces
and battle-axes. In the first onset, Scrymgeour and the men-at-arms who
fought under him with little difficulty drove back the mass of Islesmen, and,
cutting his way through their thick columns, made a cruel slaughter. But
though hundreds fell around him, thousands poured in to supply their places,
more fierce and fresh than their predecessors ; whilst JIar, who had penetrated
with his main army into the very heart of the enemy, found himself in the
same difficulties, becoming every moment more tired with slaughter, more en-
cumbered with the numbers of the slain, and less able to resist the increasing
and reckless ferocity of the masses that still yelled and fought around him.
It was impossible that this should continue much longer without making a
fatal impression on the Scots ; and the eifects of fatigue were soon seen. The
constable of Dundee was slain ; and the Highlanders, encouraged by his fall,
wielded their broadswords and Lochaber axes with murderous effect, seizing
and stabbing the horses, and pulling down their riders, whom they dispatched
with their short daggers. In this way were slain some of the best soldiers of
these northern districts. Sir Robert Davidson, Avith the greater part of the
burgesses who fought around him, were amongst the number; and many of
the families lost not only their chief, but every male in the house. The shei-iff
of Angus, with his eldest son George Ogilvy, Sir Alexander Irvine of Drum,
Sir Robert Maule, Sir Thomas Moray, William Abernethy, Alexander Straiton
of Lauriston, James Level, Alexander Stirling, and above five hundred men-
at arms, including the principal gentry of Buchan, shared their fate; whilst
Mar himself, and a small number of the survivors, still continued the battle
till nightfall. The slaughter then ceased." * According to Buchanan, " tliere
fell so many eminent and noble personages as scarce ever perished in one
battle against a foreign enemj^ for many years before." In the midst of the
carnage, the renowned chief of MacLean performed prodigies of valor.
His massive sword, wielded by an arm of great strength, laid prostrate every
foe it encountered. In the afterpart of the day, while victory yet weighed
the balance with an even hand for either side, he and Sir Alexander Irvine of
■i'Tytler's Histortj of Scolland, Vol. II., p. 41.