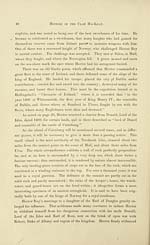 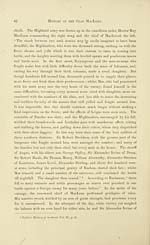 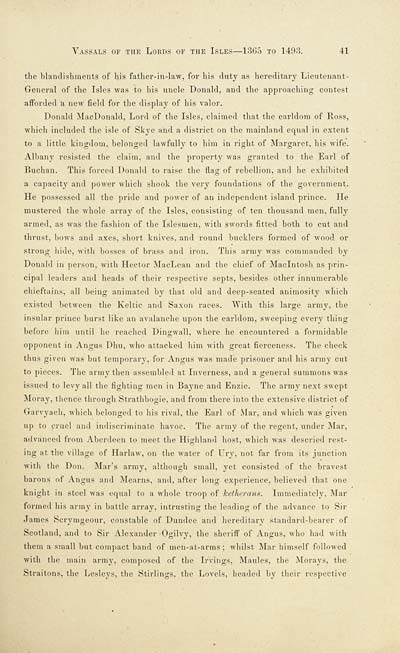 Vassals of the Lords of the Isles — 1365 to 1498. 41
the Idandisliments of liis fatlier-in-law, for his (Uity as hereditary Lientenant-
General of tlie Isles was to his uncle Donald, and the approaching contest
afforded a new field for the display of his valor.
Donald MacDonald, Lord of the Isles, claimed that the earldom of Ross,
which included the isle of Skye and a district on the mainland equal in extent
to a little kingdom, belonged lawfully to him in right of Margaret, his wife.
Albany resisteil the claim, and the property was granted to the Earl of
Buchan. This forced Donald to raise the flag of rebellion, and he exhibited
a capacity and power which shook the very foundations of the government.
He possessed all the pride and power of an independent island prince. He
mustered the whole array of the Isles, consisting of ten thousand men, fully
armed, as was the fashion of the Islesmen, with swords fitted both to cut and
thrust, bows and axes, short knives, and round bucklers formed of wood or
strong hide, with bosses of brass and iron. This army was commanded by
Donald in person, with Hector MacLean and the chief of Macintosh as prin-
cipal leaders and heads of their respective septs, besides other innumerable
chieftains, all being animated by that old and deep-seated animosity which
existed between the Keltic and Saxon races. With this large army, the
insular prince burst like an avalanche upon the earldom, sweeping every thing
before him until he reached Dingwall, where he encountered a formidable
opponent in Angus Dhu, who attacked him with great fierceness. The check
thus given was but temporary, for Angus was made prisoner and his army cut
to pieces. The army then assembled at Inverness, and a general summons was
issued to levy all the fighting men in Bayne and Enzie. The army next swept
Moray, thence through Strathbogie, and from there into the extensive district of
Grarvyach, which belonged to his rival, the Earl of Mar, and which was given
up to pruel and indiscriminate havoc. The army of the regent, under Mar,
advanced from Aberdeen to meet the Highland host, which was descried rest-
ing at the village of Ilarlaw, on the water of Ury, not far from its junction
with the Don. Mar's armj^ although small, yet consisted of the bravest
barons of Angus and i\Iearns, and, after long experience, believed that one
knight in steel was equal to a whole troop of kefhcrans. Immediately, Mar
formed his army in battle array, intrusting the leading of the advance to Sir
James Scrymgeour, constable of Dundee and hereditary standard-bearer of
Scotland, and to Sir Alexander Ogilvy, the sheriff of Angus, who had with
them a small but compact band of men-at-arms ; whilst Mar himself followed
with the main army, composed of the Irvings, Maules, the Morays, the
Straitons, the Lesleys, the Stirlings. the Lovels, headed by their respective