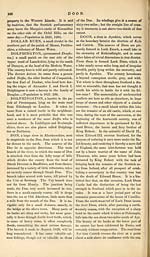 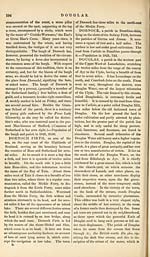 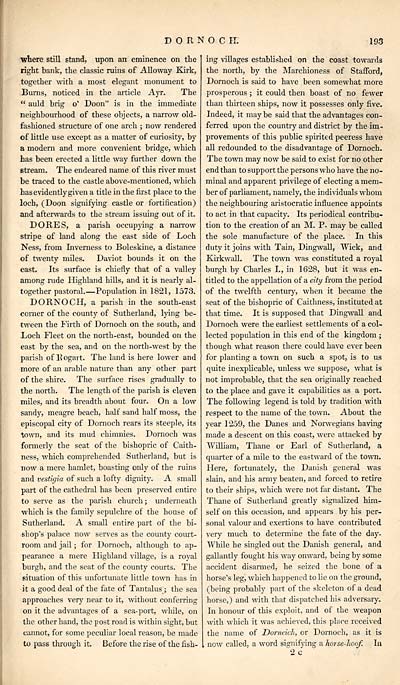 D O R N O C K.
193
where still stand, upon an eminence on the
right bank, the classic ruins of Alloway Kirk,
together with a most elegant monument to
Burns, noticed in the article Ayr. The
" auld brig o' Doon" is in the immediate
neighbourhood of these objects, a narrow old-
fashioned structure of one arch ; now rendered
of little use except as a matter of curiosity, by
a modern and more convenient bridge, which
has been erected a little way further down the
stream. The endeared name of this river must
be traced to the castle above-mentioned, which
has evidently given a title in the first place to the
loch, (Doon signifying castle or fortification)
and afterwards to the stream issuing out of it.
DORES, a parish occupying a narrow
stripe of land along the east side of Loch
Ness, from Inverness to Boleskine, a distance
of twenty miles. Daviot bounds it on the
east. Its surface is chiefly that of a valley
among rude Highland hills, and it is nearly al-
together pastoral. — Population in 1821, 1573.
DORNOCH, a parish in the south-east
corner of the county of Sutherland, lying be-
tween the Firth of Dornoch on the south, and
Loch Fleet on the north-east, bounded on the
east by the sea, and on the north-west by the
parish of Kogart. The land is here lower and
more of an arable nature than any other part
of the shire. The surface rises gradually to
the north. The length of the parish is eleven
miles, and its breadth about four. On a low
sandy, meagre beach, half sand half moss, the
episcopal city of Dornoch rears its steeple, its
town, and its mud chimnies. Dornoch was
formerly the seat of the bishopric of Caith-
ness, which comprehended Sutherland, but is
now a mere hamlet, boasting only of the ruins
and vestigia of such a lofty dignity. A small
part of the cathedral has been preserved entire
to serve as the parish church; underneath
which is the family sepulchre of the house of
Sutherland. A small entire part of the bi-
shop's palace now serves as the county court-
room and jail ; for Dornoch, although to ap-
pearance a mere Highland village, is a royal
burgh, and the seat of the county courts. The
situation of this unfortunate little town has in
it a good deal of the fate of Tantalus j the sea
approaches very near to it, without conferring
on it the advantages of a sea-port, while, on
the other hand, the post road is within sight, but
cannot, for some peculiar local reason, be made
to pass through it. Before the rise of the fish-
ing villages established on the coast towards
the north, by the Marchioness of Stafford,
Dornoch is said to have been somewhat more
prosperous ; it could then boast of no fewer
than thirteen ships, now it possesses only five.
Indeed, it may be said that the advantages con-
ferred upon the country and district by the im~
provements of this public spirited peeress have
all redounded to the disadvantage of Dornoch.
The town may now be said to exist for no other
end than to support the persons who have the no-
minal and apparent privilege of electing a mem-
ber of parliament, namely, the individuals whom
the neighbouring aristocratic influence appoints
to act in that capacity. Its periodical contribu-
tion to the creation of an M. P. may be called
the sole manufacture of the place. In this
duty it joins with Tain, Dingwall, Wick, and
Kirkwall. The town was constituted a royal
burgh by Charles I., in 1628, but it was en-
titled to the appellation of a city from the period
of the twelfth century, when it became the
seat of the bishopric of Caithness, instituted at
that time. It is supposed that Dingwall and
Dornoch were the earliest settlements of a col-
lected population in this end of the kingdom ;
though what reason there could have ever been
for planting a town on such a spot, is to us
quite inexplicable, unless we suppose, what is
not improbable, that the sea originally reached
to the place and gave it capabilities as a port.
The following legend is told by tradition with
respect to the name of the town. About the
year 1259, the Danes and Norwegians having
made a descent on this coast, were attacked by
William, Thane or Earl of Sutherland, a
quarter of a mile to the eastward of the town.
Here, fortunately, the Danish general was
slain, and his army beaten, and forced to retire
to their ships, which were not far distant. The
Thane of Sutherland greatly signalized him-
self on this occasion, and appears by his per-
sonal valour and exertions to have contributed
very much to determine the fate of the day.
While he singled out the Danish general, and
gallantly fought his way onward, being by some
accident disarmed, he seized the bone of a
horse's leg, which happened to lie on the ground,
(being probably part of the skeleton of a dead
horse,) and with that dispatched his adversary.
In honour of this exploit, and of the weapon
with which it was achieved, this place received
the name of Dorneick, or Dornoch, as it is
now called, a word signifying a horse-hoof. In
2c