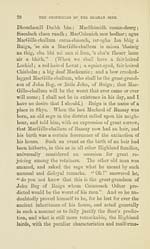 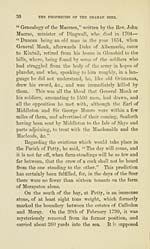 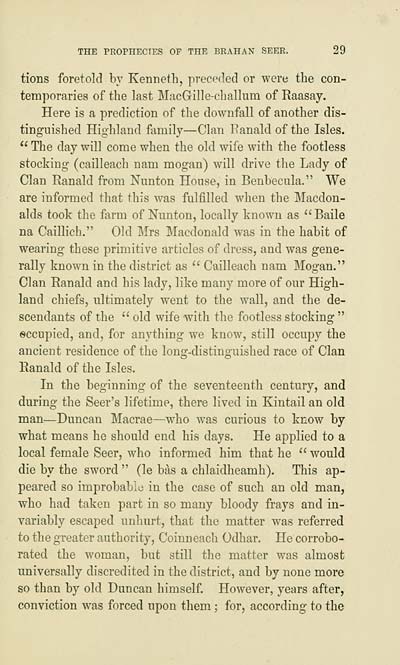 THE PROPHECTES OF THE BRAHAN SEER. 29
tions foretold by Kenneth, preceded or were the con-
temporaries of the last MacGille-challum of Raasay.
Here is a prediction of the downfall of another dis-
tinguished Highland family — Clan Eanald of the Isles.
" The day will come when the old wife with the footless
stocking (cailleach nam mogan) will drive the Lady of
Clan Ranald from Nunton House, in Benbecula." We
are informed that this was fulfilled when the Macdon-
alds took the farm of Nunton, locally known as "Baile
na Caillich." Old Mrs Macdonald was in the habit of
wearing these primitive articles of dress, and was gene-
rally known in the district as " Cailleach nam Mogan."
Clan Ranald and his lady, like many more of our High-
land chiefs, ultimately went to the wall, and the de-
scendants of the " old wife with the footless stocking "
©ccupied, and, for anything we know, still occupy the
ancient residence of the long-distinguished race of Clan
Ranald of the Isles.
In the beginning of the seventeenth century, and
during the Seer's lifetime, there lived in Kintail an old
man — Duncan Macrae— who was curious to know by
what means he should end his days. He applied to a
local female Seer, who informed him that he " would
die by the sword " (le bas a chlaidheamh). This ap-
peared so improbable in the case of such an old man,
who had taken part in so many bloody frays and in-
variably escaped unhurt, that the matter was referred
to the greater authority, Coinneach Odhar. He corrobo-
rated the woman, but still the matter was almost
universally discredited in the district, and by none more
so than by old Duncan himself. However, years after,
conviction was forced upon them ; for, according to the