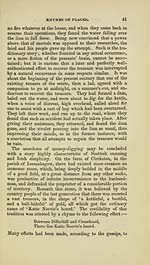 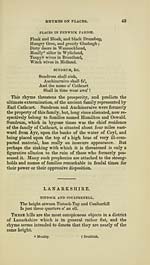 4^ POPULAR RHYMES OF SCOTLAND.
remove the stone and get at the treasure ; but all were
baffled by the bodily appearance of the Enemy of mankind,
who, by breathing intolerable flame in the faces of those
making the attempt, obliged them to desist. Thus well
guarded, the legacy of Mrs Katherine Niven lay for cen-
turies as snug as if it had been deposited in Chancery ; and
it was not till at least a hundred years after the last des-
pairing effort had been made, that the charm was at length
broken. Mr James Prentice, the farmer of Clerkston, had
the address to convince several Irishmen, who had served
him during the harvest, of the truth of the said rhyme,
and, by expatiating upon the supposed immensity of the
treasure, wrought up their curiosity and their cupidity to
such a pitch, that they resolved, with his permission, to
break the stone in pieces, and make themselves masters of
whatever might be found below. On the day after the
kirn, therefore, the poor fellows provided themselves with
a well-loaded gun, for the protection of their persons from
all evil agencies, and fell to work, with punches and mallets,
to blow up and utterly destroy the huge stone which alone
intervened between them and everlasting affluence. They
laboured the whole day, without provoking any visit from
Satan, and at last succeeded in fairly eradicating the stone
from the field which it had so long incumbered, when they
became at once convinced of the fallacy of the rhyme, of
the craft of Mr Prentice, and of their own deluded cre-
dulity.
MONASTERY OF FAILL.
This was a small establishment near Mauchline : hardly
a fragment of its walls now remains. The following is a
traditionary saying respecting the inmates, which used to
be often called up when a complaint of either hard eggs
or thin broth was made : —
The friars of Faill
Gat never owi-e hard eggs or owi-e thin kail ;
For they made their eggs thin wi' butter.
And their kail thick ^^-i' bread.
And the friars of Faill, they made guid kail,
On Fridays when they fasted ;
They never wanted gear eneuch,
As lang as their neighbours' lasted.