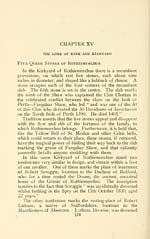 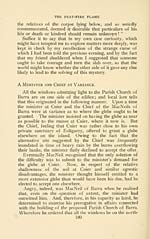 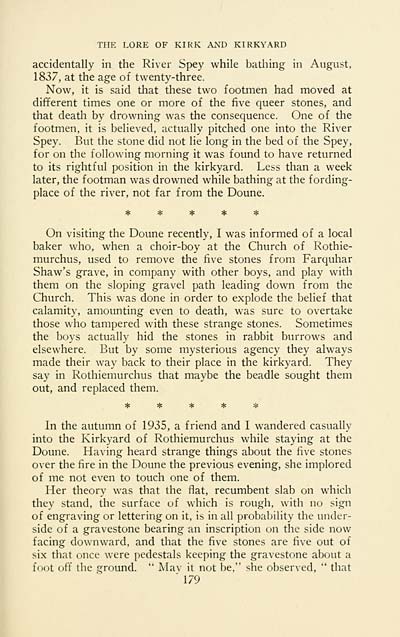 THE LORE OF KIRK AND KIRKYARD
accidentally in the River Spey while bathing in August,
1837, at the age of twenty-three.
Now, it is said that these two footmen had moved at
different times one or more of the five queer stones, and
that death by drowning was the consequence. One of the
footmen, it is believed, actually pitched one into the River
Spey. But the stone did not lie long in the bed of the Spey,
for on the following morning it was found to have returned
to its rightful position in the kirkyard. Less than a week
later, the footman was drowned while bathing at the f ording-
place of the river, not far from the Doune.
On visiting the Doune recently, I was informed of a local
baker who, when a choir-boy at the Church of Rothie-
murchus, used to remove the five stones from Farquhar
Shaw's grave, in company with other boys, and play with
them on the sloping gravel path leading down from the
Church. This was done in order to explode the belief that
calamity, amounting even to death, was sure to overtake
those who tampered with these strange stones. Sometimes
the boys actually hid the stones in rabbit burrows and
elsewhere. But by some mysterious agency they always
made their way back to their place in the kirkyard. They
say in Rothiemurchus that maybe the beadle sought them
out, and replaced them.
In the autumn of 1935, a friend and I wandered casually
into the Kirkyard of Rothiemurchus while staying at the
Doune. Having heard strange things about the five stones
over the fire in the Doune the previous evening, she implored
of me not even to touch one of them.
Her theory was that the flat, recumbent slab on which
they stand, the surface of which is rough, with no sign
of engraving or lettering on it, is in all probability the under-
side of a gravestone bearing an inscription on the side now
facing dow^nward, and that the five stones are five out of
six that once were pedestals keeping the gravestone about a
foot off the ground. " Mav it not be," she observed, " that
" 179